You are here: Products Catching Carrie by Pippa Greathouse 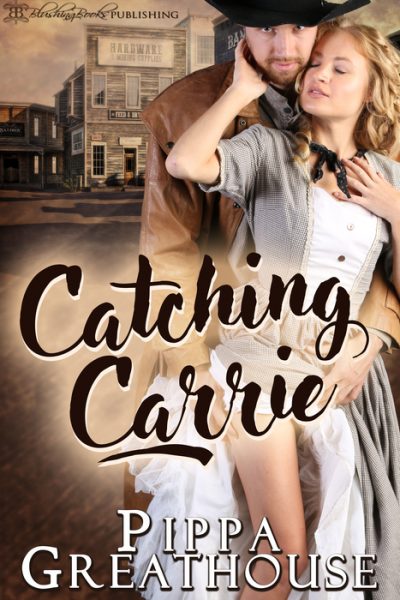 Carrie arrives in Lesterville, in 1885, quite alone. She has no money, no friends and no place to stay. Hank, the man she is to marry, fails to show up to meet her, and she has no idea what to do.

On top of that, the justice of the peace has left town and won’t be back for well over two weeks.
When the sheriff of Lesterville, Sam, offers the top floor of his house to her, she has no option but to accept his hospitality; after all, he has assured her that Mr. and Mrs. Clancy, the caretakers, will be there to chaperone her.

One thing she learns about Sam, however, is that while he is willing to go to great lengths to protect her, he has very little patience with young ladies who are not completely honest with him – and those who disobey. She, unfortunately, has already broken that rule and is about to break it again…

As days go by, Carrie sees no sign of her intended. And when she finally does, she realizes his instability and volatility and is left with a choice. Can she make the right decision?
Or will keeping her word endanger her own life?

Publisher’s Note: This book contains the discipline of an adult woman. If this offends you, please do not buy or read it.

Pippa Greathouse has been writing since the fifth grade, after each student was given an assignment to read aloud a story to the class of her their writing. One horrified teacher later and a class of students who thought the horror story was “cool,” and she was hooked.

Since then, the writing has continued. She now is an author for Blushing Books, and loves what she does. Her favorite genre is historical fiction romances, where men are “strong, Alpha men” and their feisty ladies who are in need of the discipline they are sure to provide. And historical fiction is perfect for that!

Her hands reached up around his neck before she knew it, and she eagerly tasted his tongue, allowing her own to dance delicately with his. Suddenly, she realized how wanton she seemed, and gave a strangled cry.

“Carrie,” he said gruffly into her hair. “Marry me. I cannot allow you to marry Hank Barrow. I’ll tell him that I have forbidden you to—”

“—Samuel Pettigrew.” As if she fully heard what he’d just said, she stiffened. “You have forbidden me? I seem to recall you telling him that it was up to me. That no one would make that decision for me. And if I decide not to marry him, I’ll pay him back the money he spent from what I earn from my sewing. He must be patient and wait for me to make it.”

Sam stared down at her, his eyes narrowing. “Are you refusing my offer of marriage, then?

She pushed back against his chest, glaring. Her voice was angry. “‘Carrie, marry me,’ is not an offer, Sheriff Pettigrew. It’s an order. I haven’t made up my mind. And I’ll answer you when you ask. Nicely.” She stepped back. “I’ve decided I wish to be courted. Properly.”

“Have you now,” His voice was amused.

Although she couldn’t see his face clearly in the darkness, she heard the mirth in his voice.

“Yes. I have. With buggy rides. And flowers. And a ring. And I wish my suitor to get down on one knee to beg me to marry him.” She lifted her chin and then turned away.

“I see. Do you see Hank Barrow doing that?”

“If you tell him anything, I’ll insist on going with you. You are absolutely not to go alone.”

Sam took her to the porch, and put one foot up on the second step. Taking her by the waist, he plopped her over his thigh, holding her there with one hand. With the other, he lifted the tail of her gown and planted ten hard swats on her bare bottom, before standing her upright to face him.

“Let that be a warning, young lady. If I so much as catch a hint of you planning to go out there by yourself, the next spanking you get will be with the strap. Hear me?”

Even on the second step, she was forced to crane her neck to meet his eyes. Her own were blazing with anger, but tears were pooling. She turned to run into the house, forgetting the last step. When his hands on her waist caught her, and set her upright on the top, she took off, jerking open the front door and running up the staircase to her room.