You are here: Products Casual Factors by Helen Blacksmith 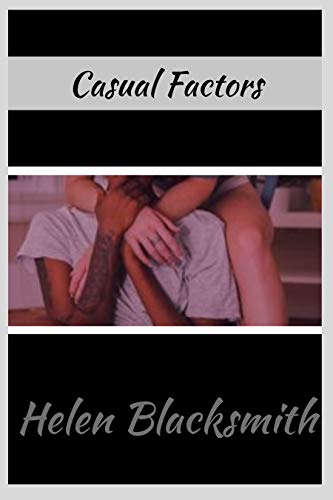 Christine West is a recovering addict on her third month at Narcotics Anonymous. She attends weekly meetings and grows close to the group that meets every Tuesday night. She particularly becomes close to a new member of the group named Ellen Davis, despite her live-in relationship with her long time lover, Marcus Casey. When members of the group start dying of overdoses, it shakes Christine to her core. With her recovery already hanging precariously by a string, and her ongoing battle with her sexuality, will these events push her towards sobriety or back towards her addiction? A story of love, recovery, and redemption.

Helen Blacksmith is the pen name of this Western Mass native. This self-publish author currently has three novels under her belt: Battle Scars, made its debut on May 26, 2018, The Summers We Lost released on July 18, 2018, and her NEW RELEASE Casual Factors which made its debut on November 15, 2018. Her free time is spent with her two pit bulls, Olive Oyl and Osczskar, and she enjoys drawing, traveling, food, music, and tattoos. Her favorite authors include Maya Angelou, William Shakespeare, and Janet Evanovich. She is also a lover of soccer and all Boston sports, mainly the Red Sox and the New England Patriots.

This book was inspired by the current opioid epidemic in this country. I wanted to write it from the point of view of someone that was struggling but still had the potential to change their future.

I feel the pounding in my head before I even open my eyes, the thumping so strong I think I can actually hear it. I’m on my stomach with my arms wrapped around my pillow as my eyelids flutter open, and the bright sunlight hits my pupils from the cracked window shade. That’s when I realize that the noise is real. Someone is knocking on my front door. I grab my phone from my nightstand and the time reads 4:17 PM. I also have seventeen missed calls and twenty-three text messages.

“Fuck,” I say as I drop my phone next to me and rub my forehead. Pain spreads across to my temples and into the bridge of my nose as I try to remember how I got home last night. Marcus maybe? I have no idea. My tongue is thick and dry, coated with the aftertaste of tequila and cigarettes. I cough to clear my throat and am suddenly overtaken with the hacking, smoker’s cough that typically plagues my mornings. I put my head back down as I try to piece together the details of last night, but everything is coming up dark and blurry. The last thing I remember is Marcus picking me up off a bar stool, and the rest is black.

I hear the key in the lock, and I figure it must be my father. Marcus, who is my boyfriend, works the four to midnight shift and he probably already left for the day unless he forgot something, but I doubt it.

I live in a small loft apartment above a liquor store and a greasy spoon diner called Newman’s in downtown Winter Hill, Oregon which is a former factory city that always balances precariously between prosperity and poverty. Sort of like me and sobriety. The paint on the walls of the apartment are a drab green-gray with chipped white trim, and the floor plan is open with a smooth chestnut wood floors. When I first rented the apartment, the only room with a door was the bathroom, but I installed French doors that now separate my bedroom from the rest of the house, and while it doesn’t seem like much, it’s spacious and clean, and it is mine.

I hear his heavy boots as he comes in, complaining about the smell of cigarettes and alcohol.

“Chrissie? Where are you?” his gruff voice calls.

My father is sixty-four years old, tall with broad shoulders and a barrel chest, but he still works like he’s in his twenties. He owns Westin Roofing Company, a business that he built from the ground up and that is now one of the most successful roofing companies in western Oregon.

“I’m in here,” I say in a raspy voice as I turn over and sit up against my headboard coughing.

“Why do you insist on staying in this shit hole? You know I’ll take care of you sweetheart,” he says as he makes his way through my sparsely furnished apartment.

“Good morning to you too, Pops.”

“Good morning? Try the fucking afternoon. Where were you today? You said you were going to show up and you no-showed. What gives? I was down two guys, and I needed you,” he says as he throws me a plastic package. I barely look at it because I already know what it is, and we don’t talk about it. It’s from the needle exchange program and has everything I need for a one time hit of heroin plus a pack of condoms and a leaflet on how to start the rehab process. He knows that I have been clean for over six months, but he still makes sure that I have what I need just in case I relapse. It wouldn’t be the first time, and he always wants to make sure that I am safe.

“Do you have any you want to exchange?” he asks as he sits in the recliner at the foot of my bed and scratches his scruffy, white beard.

I light up a cigarette as I shake my head no, and I look straight ahead as he stares at me in silence.

“That shit will kill you, you know that right?” he says as he raises his hand, indicating the cigarettes, but we both know what he means.

“I’m sorry Pops,” is all I can say as I focus on my cigarette and he sighs heavily.

“You know you’ve put me three days behind on this job now, right?”

I shake my head and continue to take drags of my cigarette. I mean, I didn’t have anything to say that would make this better. I fucked up and no amount of “I’m sorries” is going to fix it. I look at him apologetically, and he sighs heavily again.

“How’s the arm?” he asks indicating the bandage on my right arm as he takes off his ball cap and runs his hand through his thinning sandy blonde hair.

About six months ago, an abscess had formed where I had been shooting up, and I developed a bacterial infection that had to be lanced and drained, and it left me with a four-inch wound that needed to heal from the inside out.

“Much better,” I say as I take a long drag on my Newport.

“Is that what kept you out of work or did you go on another bender?”

“A few too many doesn’t typically knock someone out until four in the afternoon,” he says as he squints his eyes at me. “Anyway, you going to bother to show up tomorrow at least?”

“I said I would be there,” I say this with a little more bite than I intended, but my head hurts, and his riding of me right now is the last thing I want to listen to. I know what I did. I didn’t need him rubbing it in my face even if that’s not what he intended to do.

“You know I love you right?” he asks as he walks over to me and kisses me on my forehead.

“I left a bag of food in the kitchen from the diner over in Hampden that you love. I figured you hadn’t eaten yet today so… it’s a bacon cheeseburger and fries, a strawberry milkshake. I know you don’t like me eating that shit, but I figured you could use the calories. You’re looking rather thin these days. I’ll see you in the morning, kid.”

As he leaves, I stub out my cigarette and grab my phone and head into the kitchen area to get to the bathroom. There is a brown paper bag that is coated in grease on my small pub table, and my mouth instantly waters making me forget where I am going. He’s right when he said that I hadn’t eaten today. Actually, when was the last time I ate? Probably yesterday at breakfast time. I split a bagel with Marcus before he left for training.

I open the bag and immediately shove salty fries into my mouth as I try to unwrap the burger with one hand. My stomach is cramping with need, and I can’t get the bread and beef and cheese and pickles and ketchup into it fast enough. When half of the food is sitting comfortably in my gut, I slide my phone open and begin checking my messages. More than half of the texts and phone calls are from Marcus last night seeing where I was and what I was doing. Several are from my father asking the same thing. But the last text is from Rob asking if I was coming to The Den tonight to party. I squint my eyes in confusion. I haven’t been to The Den in at least four weeks. Not since the infection in my arm, and had no plans to return any time soon, but something inside me was always drawn there.

Rob Sampson was your typical frat boy without ever having attended a college. You know the look though: ivory white skin to match his ivory white teeth with muscles from things like rowing and rugby, bouffant-styled brown hair, Izod t-shirts, khaki pants, and boat shoes in a thirty-five-year old’s body with a wicked streak a mile wide. And our history together was just as long and probably just as bad. I guess you could say that we “dated” after I graduated high school but all we really did was fuck, and after we broke up he became my regular dealer of coke, pills, or whatever else I was in the mood for, and finally when those things no longer satisfied me he introduced me to heroin. Because of our history, I would sometimes exchange “favors” with him for hits. It wasn’t something I was proud of, but I think it’s what kept me from stealing to pay for my habit. I hadn’t had any smack since my last incident, but I would be lying if I said that the craving wasn’t there. I grab my purse and check my wallet, sighing with relief when I see that I have just enough cash for a dime. But I’ll only get a nickel.

That’s nothing, I think to myself.

What can it hurt?