You are here: Products Casstiel by Sheri-Lynn Marean 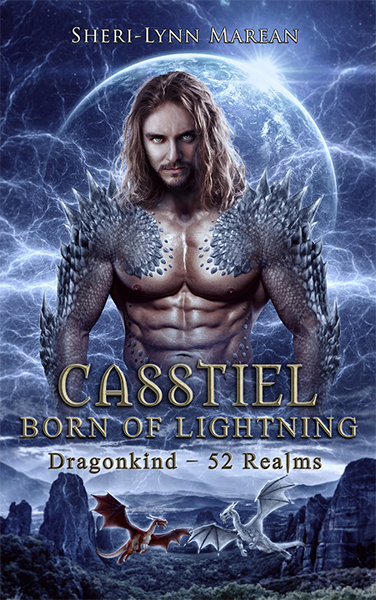 Dragon shifter Casstiel should’ve joined his mate in the afterlife when she died. He didn’t. Fate changed the rules and tethered him to another female—the enemy.
For ten years Casstiel searches, only when he finds her, he’s faced with a horrifying truth; he’s protective and fiercely attracted to her. Even worse, she makes him question what it is he really wants.
Half Fire-born, Ashara’s never soared the skies or shifted into her dragon. Instead, she’s been a slave to the Ilyium. Her only solace has been a connection to another. When suddenly freed and confronted by a large, sexy male who scares the hell out of her, Ashara’s at a loss. As her heart awakens to a love she never dreamed possible, Ashara struggles to find her place, until a shocking discovery changes everything and may not be what anyone wants.

Sheri-Lynn lives in farm country in Western Canada, with an inspiring view out each window. She grew up riding and working with horses/racehorse, drawing and selling animal artwork, and of course reading. Sheri-Lynn fell in love with reading at age twelve while reading The Black Stallion series by Walter Farley. One day in 2008, after an unsatisfying book, she decided to write her own. Inspired by her favorite authors who write paranormal romance, Jax, Sami and Tierney came to life in Sheri-Lynn's mind. The Dracones were born, and she never looked back.

As I write, more and more characters appear, and demand I tell their story. Cass was one of them. This is book 2 in my spinoff; Dragonkind series, and can be read in sequence or as a standalone, though I warn you, you will want to read the others after.

I’m dying, yet I live without you. Casstiel directed the thought up to his mate in heaven, then closed his eyes. The thunder eased up and the snapping and sizzling bolts of lightning slowly died out. His power faded and his head fell into the blood-soaked dirt. He lay there and let his body go lax. A rancid, charred stench surrounded him as ash slowly fell to the ground like grey flakes of snow, only nastier. It was done. He should feel better, but never did. That angry pit—the bottomless black void inside him, continued to stretch for miles, yawning, craving more.
He sought oblivion, but was never quite able to reach it, no matter how he tried, or what he did, and today wasn’t any different. Bit by bit, his body came out of the comatose state he sought, and awareness grew, until he could feel each and every stinking cut and wound. They covered him, and he didn’t care. They’d heal, and the pain was good.
Maya, why did you leave me behind? The question reverberated quietly through his mind, just as it had millions of times over the last eight years since his soul mate’s death. Though he hadn’t always been silent in his quest for an answer. The agony of loss so long ago, yet so fresh, had moisture prickling the backs of his eyes. Then a noise snapped them open. Shit, he was found once again.
“Damn Cass, you’ve got to stop this, it’s killing you.” Zales crouched beside him.
“I wish,” Cass groaned and rubbed at his face. He sat up and attempted to stand.
Zales put a hand on his chest, stopping him. “Wait, at least let me remove the blade embedded in your side first.”