You are here: Products Cassandra by Lottie Winter 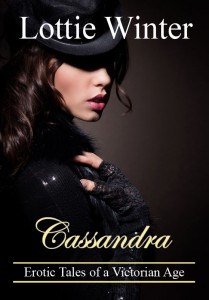 “When you accepted employment as a governess in Victorian England, you assumed your life would be set on an unchangeable path. After the death of her parents, Cassandra, a young woman with a talent for music assumes the role of governess to two young children, whose own mother died a few years previously. However all is not as it seems, and after an initial quiet few months, she is spotted by Thorpe Pembroath, the owner of the Estate, father of the children and her employer.

A dinner invitation very quickly proves to have more to it than initially meets the eye, and Cassandra is suddenly swept without warning into a world unlike anything she has ever seen or known before.

But for all of Cassandra’s fears and insecurities at what is shown to her, it is ultimately Thorpe, a dark, brooding and intelligent man, who can without warning show a ruthless cruel streak , whose life is turned on its head and for whom the weekend will mean his world is forever changed.”

I hope you enjoy reading my books, as much as I love to write them.

I loved writing Cassandra, and the prequel short “The Inauguration of the Carnal Set”, and have started work on the next Carnal Set book!

From Chapter One
Tucking a stray hair behind my ear, whilst at the same time wiping a tear discreetly from my cheek, I found myself allowing the sound of Reverend Sand’s funeral liturgy fade away. I glanced about the gathered congregation, half of whom I knew were there to take a look at the soon to be destitute unmarried daughter, their chatter being, if I could keep my composure long enough for the funeral to be over. There were as many hoping I would crumple as there were those willing for my back to stay straight and my countenance strong.
My fall from grace had been swift and absolutely not of my own doing! My mother had died some ten years ago, when I was just twelve years old. I could still remember her smile and the way her hair tickled me when she grabbed me and scooped me up into one of her huge unladylike cuddles. I felt safe knowing she would never let me go. But lots of the details were getting fuzzy, every now and again, I would smell something; a flower perhaps or the honeysuckle scented perfume she wore and those half-forgotten memories, would briefly wash over me. After my mother’s death my father, a celebrated conductor, fell into his brandy bottle. For a few years his reputation had carried him and society had allowed him to falter, but eventually the jobs dried up as orchestra’s stopped using him. It had been at this point, of apparent rock bottom, that I had witnessed what I had thought was my father rallying and reinventing himself; the drinking ceasing and the music back in his life.
It was not until his death just nine days ago, that the truth had finally made itself known, my father had been secretly drinking, gambling and spending his time in places no respectable man should ever been seen. As soon as his creditors realised he had died, they were scrambling around looking for the money they were owed. The house and all the contents would have to be sold, I would be lucky to still have the clothes on my back when they had finished. I fingered the hem of my cloak, my mother’s jewellery having been sewn in there by Mrs Suggins, our housekeeper. The very moment she realised what was happening, she had gathered up the small amount of jewellery my mother had possessed and had hastily sewn it all into the hem of my cloak, the creditors would not be taking that! I had since added to the hems of my day dresses all my own jewellery, and a few gold sovereigns. In fact anything that was small enough, with any notable value currently inhabited the thick hems and linings of my dresses. Not worth a fortune, but enough I hoped to keep me off the streets, there were even diamond earrings sewn into the lace of my nightgown………………………
From Chapter Two
Stretching in what I knew was a languid fashion, I had totally forgotten about the little wench laying next to me, and it wasn’t until I inadvertently kicked her that she awoke and wriggled about. She poked her head out from under the sheets, a warm smile and an endearingly freckled nose greeted me but I really wasn’t in the mood, instead I groaned and turned over ignoring her. I remembered vaguely that she was Martha, one of the kitchen maids, she wasn’t someone I would normally come across but drunk, horny and on the prowl she had taken very little in the way of persuasion to accompany me and as I recalled it. The little slut had moved well, I most certainly wasn’t her first. She had squealed at the right times, seeming more than happy when I slipped silk scarfs around her wrists and ankles while pulling them tightly together, rendering her helpless and ripe for the taking.
And now she wasn’t giving up, or taking the hint, I could feel warm hands snaking their way around my body, slipping between my legs and without a moment’s hesitation wrapping around my semi erect morning cock. At that I growled and slapped her hands away.
“Has a night with me, not taught you anything girl?” Although she shrunk back from me, I could see a grin still on her face, the knowing little slut was well aware of what she was doing. Embracing that look, I raised myself out of my bed, pausing for just a second to grab at the goblet of water on my bed stand, I took a long gulp to slake the thirst born of far too much wine, whisky and brandy the night before.
I grabbed her roughly, spinning her about so her head and neck dangled over the edge of my bed, this not being the first time I had indulged myself in such things. Although I wasn’t short by anyone’s regard, at just under 6”, I knew my bed was far too high to allow me comfortable purchase, so leaning under I pulled out a small stool which was set there just for this purpose. Pushing the practical thoughts from my head, I got back to the business at hand, or more aptly I got back to the young woman currently squirming under my strong grasp.

Be the first to review “Cassandra by Lottie Winter” Cancel reply