You are here: Products Cash Me Out: Life and Death in Paradise by Paul Russell Parker III 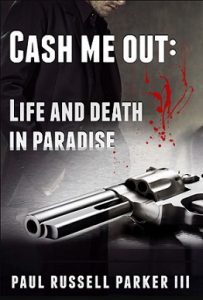 Cash Me Out: Life and Death in Paradise by Paul Russell Parker III

Staring out at the sunset. Water ebbing, and flowing over his feet. John Gabriel Warden finally felt content. He found paradise. Not only did he find paradise, but he bought a house and bar on it. Things couldn’t get any better than this. That’s what Warden thought. Until he met her. Warden didn’t start out looking for love, but destiny put them on a path towards each other. What she or Warden didn’t know was that his troubled past would be coming back to haunt them.

In this action packed adventure, Warden and his friends will be shocked out of their relative calm. Just when they put their old lives behind them, they will be forced once again to respond with the violence of action. There is no shying away from it; scores will need to be settled. They will have to see if they can muster enough strength to make it through this one last devastating struggle between life and death. Will they be able to wake from this nightmare, or will their dreams that became a reality be forever ruined? They didn’t start this fight, but they are more than ready to finish it.

Paul Russell Parker III is married, and has two children. Born in southern California, he now lives on the Crystal Coast in North Carolina. He enjoys taking his kids to their many dance and sporting events. He likes to watch football, and taking his family on trips. He is a Veteran of the United States Marine Corps, and Operation Iraqi Freedom 1. After the military he got out and earned his Associate’s degree from Coastal Carolina Community College, and his Bachelor’s degree from the University of North Carolina Wilmington. Since then he’s traveled all over the world, and has held a multitude of jobs. Including working on military contracts throughout several Middle Eastern countries. He would like to write a few stories that he hopes others may enjoy.

How did they make good on the discovery? Were they caught? How did they live life. What goes on after you have a journey like that? I also wanted to make it as realistic as possible. A bar owner on a Caribbean Island that has American college students at a University Hospital? The owner was bound to meet someone, just like in real life. I wanted to write the after affect, and also new adventures. I decided to see what happens when the past caught up with our main character, and how everyone in his life dealt with it.

Be the first to review “Cash Me Out: Life and Death in Paradise by Paul Russell Parker III” Cancel reply