You are here: Products Carrie (Taken by the Instructor) An Innocence Undone Erotica Short by Lexi Fox 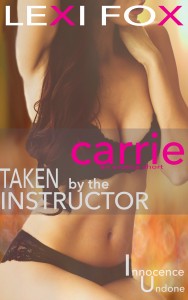 Carrie was sent to me from culinary school, trussed up like a holiday turkey in her textbook chef’s attire. Starched and unsoiled, I couldn’t wait to tear apart her layers and expose her to her baser desires. Like taking candy from a baby, I would take everything from her.

Little did I know, she wanted to do the same to me.

I would make beautiful Carrie Carlyle from Louisiana beg for mercy and I wouldn’t let up until I turned her from an innocent student into a depraved woman.

So find a nook and settle in with a little wine, a lot of chocolate, and this erotica short. Let me know if you want to revisit a particular couple because that is an option. This series doesn’t have to come to an end. I could add on to any of the stories…maybe you’d like to see Carrie go another round with Caleb, or check in with Faith and see how she’s faring as she accommodates two guys. The sky’s the limit, as they say.

I used to teach at a university. It was a program that included an internship component. I thought of the series, Taken by the Instructor, because I used to daydream about writing during my own internship. However, this instruction extends beyond the classroom. The girls in these books get a little too wrapped up in their instruction.

Awesome. I want her front and center tonight and now I’ve got her. I want to be there when the first tomato-based sauce hits her chef’s coat, I want her close enough to smell the perspiration when she can’t stand the heat, but most of all I want to watch her break. What can I say? I’m a sadistic fuck. I like to take broken things and fix them. And when she breaks, I’ll take great delight in making the repairs.
“Carrie! Where’s my grilled, bone-in ribeye?”
It’s nine and the night’s getting away from her. Both of my twelve tops are full, not to mention every four top in the house. Good pacing in the kitchen comes with thousands of hours. She hasn’t had enough time to master it yet. Of course, I knew this when I put her at the busiest station.
I step in line next to her to help catch her up and hoping to find a glaring mistake in the process. An order for snapper is called out from somewhere behind us. She’s in the seafood cooler one minute and then frantically running to the back the next. “What the fuck, Carrie?”
“I’m out of snapper.”
There’s no more snapper in the back, but I let her run it out anyway. “Eighty-six the snapper,” I yell over my shoulder and hear an “on it” in reply.
I look up just as she’s running back yelling that we’re out of snapper when her foot takes a black seedless grape. It’s comical watching someone try to right themselves. Her hands are flailing, her back arched like she’s in the matrix. I reach out and grasp her by the arms, pulling her so hard into me that my breath is knocked out momentarily. She’s startled, her eyes watering. “Watch yourself.”
“On deck, six Kobe beef burgers and four quail.”
“Fire,” I yell back, pulling the steaks from the cooler and throwing them on the grill. The fire flares and I yell, “Come on move! Grab those quail.”
She complies and I help her get caught up knowing good and well she’s forgotten her bone-in steak in the oven. “Where’s the VIPs ribeye?”
Her hands fly into the air—she’s disastrous in the kitchen. “It should be just perfect right about now.”
Wrong. It’ll be medium-well. A tragedy. Pulling it from the oven it pops and sizzles as she removes it from the pan with tongs, placing it on the plate.
“Is that medium rare?”
She slams the pan on the cooktop—it’s on, but she’s not noticed. The next thing she’s going to do is set my kitchen on fire. I have time to drum my fingers on the counter while she digs in her chef’s jacket, pulling out a thermometer and sticking a hole in my kobe fed beef.
Fuck, this girl.
Her fingers are all over the meat. “Well, I think so.”
“You think so?”
She chews her lip hard and pulls her thermometer from the meat. “No, it’s good. Yeah. It’s good to go.”
“For my VIP?”
She nods and takes a deep breath, her eyes frantically searching the kitchen. I walk up behind her, standing so close to her that it forces her bent over the counter. I lean over her, whispering in her ear, “I want you to carry this plate of steak to my office and sit with it on your lap. While you’re in there, I want you to think about tonight—pros and cons. And then we’re going to have a serious discussion.”
“But I—”
“Shh.” I place my finger over her lip and then retrieve my preparation of the same cut of beef from the second oven. She watches me, tears welling in her eyes. She nods slightly, defeated, and grabs the plate, making her way to my office.