You are here: Products Carolina Hurricane by Gwendolyn Grace 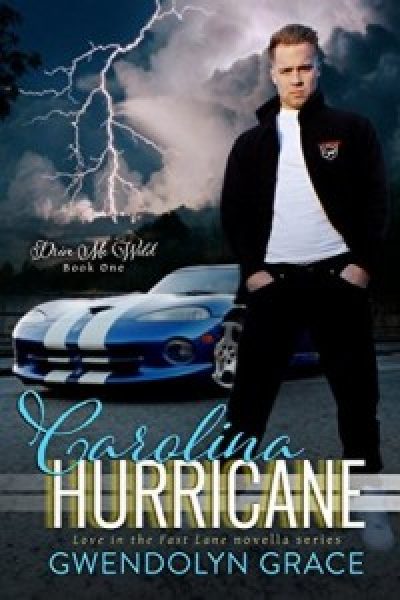 Harley is a drifter with no particular destination in mind. Her smart mouth and tough girl exterior have gotten her through some pretty rough times in her life. She has no idea when she hitches a ride with a handsome stranger to get out of the rain that she has met her match. Harley and Fox soon discover that the chemistry between is so strong that it can rev an engine to the red line. Fox is deeply devoted to his family and loves fast cars. Harley thinks Fox will be an easy target to have some fun with so she uses her assets to make him as uncomfortable as possible but he sees right through her. He might also be the only one who can crack her hard outer shell. Carolina Hurricane is a sexy, humorous, adrenaline-pumping sweet ride.

Suddenly Fox turned and reached the bed in three strides until he was standing above me with an intense stare. “How did you do that?”
“Do what?”
“Go from being a real cool girl to a jerk in a split second?”
“Or maybe you just get your feelings hurt too easily.”
“Maybe you’re trying too hard to be mean.”
“I don’t have to try.”
“Wanna know what I think?”
“Not really.”
“I think all that is a cover-up. Some kind of trick, like smoke and mirrors.”
“Oh, really and what am I trying to hide?”
He didn’t answer as he sat on the edge of the bed and walked his fingers up from my ankle, around the curve of my calf, under the skirt of my dress and along my inner thigh, almost absently. My body shivered under his touch as I bit down on my bottom lip to keep from moaning.
“That’s a good question. What are you hiding?” He paused for a moment and our eyes locked. Then he continued to move his fingers up until his thumb brushed the edge of my panties. I gasped softly but didn’t move and his fingers stilled. I realized that I was holding my breath in anticipation. Of what? I wasn’t entirely sure.
“Say it,” he ordered in a low and steady voice. My eyes met his and suddenly I knew exactly what he was doing. It was like our game of War, neither of us wanted to back down from a dare. Except I felt he wanted to do it just as much as I wanted him to. Those brilliant blue eyes held me captive and made me believe that he was capable of so many things. Gone was the polite and considerate Fox from earlier, right now all I saw was raw hunger and desire.
This was just bourbon and boredom, right?
“I dare you,” I whispered, only holding on to my control by a thread.