You are here: Products Carnival of Dreams by Faris O’Neill 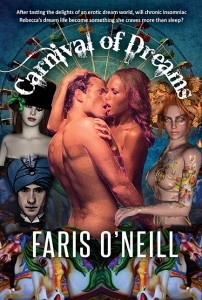 Carnival of Dreams by Faris O’Neill

Rebecca was still suffering from debilitating insomnia eighteen months after the auto accident that took her fiancé’s life, and desperately craves the sweet oblivion of sleep. After trying a sleep hypnosis video, her life becomes quite bizarre, as this one innocent decision leads her down a road filled with amorous escapades.

She continues to be drawn back to the carnival by the promise of spending time with her deceased fiancé, while being pursued in real life by the sexy Marine who has awakened something in her that she believed to be long buried.

Will she be able to break away from the lure of her beloved—but dead—dream fiancé and give herself to a real flesh-and-blood man?

I now live on a small ranch near my sprawling clan in Colorado, with a burly husband, two elfish sons and an ever-changing menagerie of dogs, birds, cats, goats, hamsters, and assorted other small beasts.

I love the idea of lucid dreaming, and was struck by the thought, “What if you had crazy hot sex with someone in a dream, and they turned up in your waking life?” What would you do? Would it be awkward? So I took that thought and combined it with my love of Scandinavian and Norse folklore, and created a mystery within a dream!