You are here: Products Candy Houses by Shiloh Walker 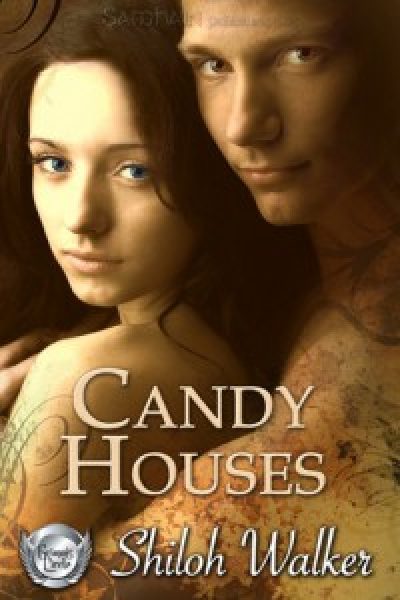 Greta didn’t get her happy ending her first time around. And now that she’s a Grimm—special kind of guardian angel and official ass-kicker in the paranormal world—romance is hard to find. Besides, there’s only ever been one man who made her heart race, and the fact that he did scared her right out of his arms. Now Rip is back. And just in time too, because Greta needs his help.

On a mission he knows is going to test all of his strengths and skills, the last person Rip expected to see is the one woman who broke his heart. Working together seems to be their only hope. But, when faced with a danger neither of them anticipated, the question is, how will they face the danger to their hearts—assuming they survive, of course.

Warning: Dark, sexy, a little bit scary—this fairy tale is only for grownups and is best saved for bedtime.

“I miss you,” he rasped against my mouth. He had his hand fisted in
my hair, using it to hold me still as he took the kiss deeper.
“How can you miss me?” I smiled at him. Even in my dreams, I had to keep it light, had to. “I’m right here.”
“Not really, you’re not.” He stroked a hand down my side, cupped my hip and circled against me. “I’ll wake up alone…this is just a dream.”
“Hmmm.” I nipped his shoulder. “If it’s just a dream, we should probably make the most of it, don’t you think?”
Nudging at his shoulders, I pushed until he moved away and lay on his back. I rolled on top of him and took him inside, shuddering in pleasure. His hands gripped my hips and his eyes, those dark, sinfully sexy eyes, stared at me, rapt on my face.
Like nothing else existed for him…just me.
“Nothing else does exist for me,” he muttered. “Not when you are near me.”
Part of me wondered how he knew I was thinking that. The other part didn’t care—the other part was too lost in the pleasure to comprehend thought. He lifted me up with his strong hands as though I weighed nothing. Slow…steady…
And not enough.
Reaching down, I wrapped my fingers around his wrists. “Faster,” I said, staring down at him. “Harder.”
Rip’s lashes lowered. “I don’t want to hurt you. I don’t want to scare you.”
“You wouldn’t ever hurt me. You couldn’t ever scare me.”
As I said it, the dream shifted around me and we were no longer the beach, but in a bed. A big, soft bed that cradled me like a dream as Rip moved over me.
“Say my name,” he whispered. “Let me hear it.”
“Rip…”
“Tell me you’ve missed me,” he ordered, kissing me hard and rough. His voice was just this side of desperate, something I wasn’t prepared for, not with him. “Give me something, damn it.”
But I couldn’t ignore that plea—it was just an echo of my own need, anyway…right? That’s all dreams were.
“I’ve missed you,” I told him. Then his mouth came down on mine and he was kissing me like he could drown in me.
One second I was dreaming, lost in Rip’s arms, lost in his kiss and hovering on the edge of climax, and the next second I was awake, brutally awake and all too aware of the fact that I was being watched. I jerked up in bed, clutching the sheets and blankets to my chest.
Rip was standing in the doorway with one shoulder propped against the door jam. He had a look in his eyes that sent my skin to tingling all over. I mean all over—I felt it in my lips, my toes and every square inch in between.
“Hey,” I said. My voice cracked.
He continued to stare at me.
It was very, very unnerving the way he watched me.
“Ahh…is everything okay?”
He didn’t answer. Nope, what he did was push off the door jam and come over to the bed. He knelt down by the bed, resting one hand on top of the blankets. He had such damn nice hands…the hands of a poet, a warrior…a lover. One of those lovely hands was only an inch away from my thigh too. I thought I could even feel the heat of it, through the blankets.
“You were dreaming,” Rip said, his voice low and rough.
Oh, shit. Swallowing, I dredged up an innocent smile. “Was I?”
“Yes.” His eyes, that dark, melted-chocolate gaze, locked on mine and I felt frozen in place. Unable to move as he laid a hand on my cheek and stroked my lower lip with his thumb. “Do you remember it?”
Oh, man, did I remember. But I couldn’t really tell him that, now could I? Self-preservation is a lovely thing, and I looked him dead in the eye and lied. “Nope.”
Self-preservation is a lovely thing, yeah, but it doesn’t make me a better liar.
He smiled, a wolf’s smile. “You don’t remember?” He leaned in and nuzzled my neck, his breath teasing across my flesh like a caress. “Maybe I could jog your memory.”
The hand on my cheek stroked down, over my neck, across my collarbone, down, down. The tips of his fingers brushed against the curve of my breast and I realized I’d dropped the blankets and was sitting there as naked as the day I was born.
“I’m good. No need to jog the memory.”
“You whispered my name,” he murmured, nipping my earlobe. “Then you moaned. You sounded exactly like you did the first time I made you come.”