You are here: Products Candii Kayn by Jolene Dubois 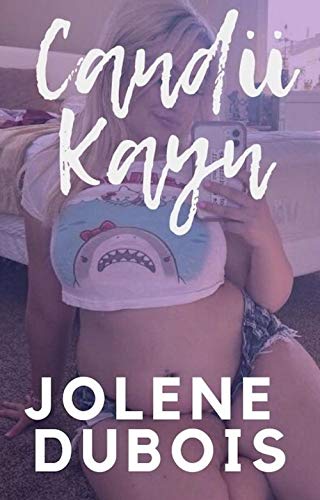 Before coming to Greece, Candy knew that she wanted to get thicker and curvier for sure. She was tired of being the little petite girl she had always been and she loved the idea of having a huge round ass, and seeing her boobs get bigger, and maybe exploring her fantasies with her soon to be husband more frequently, but now she was feeling something entirely different.

Jolene Dubois is a romance author who also writes mainstream mystery novels under a pseudonym. While she is straight, she appreciates women with curves as much as the men who love them. She finds that sexiness is the contrast between the masculine and the feminine and that is what she enjoys writing about the most. What do we do to satisfy our partners when we are in relationships?

The answers, like so many things are often revealed in the form of a story. Jolene can get turned on by her own expanding hips and thighs just as much as she can by a strong man with broad shoulders and rock hard muscles, and she's not afraid to write about how she feels, in the sexiest way possible OMG!

The feeling of being stuffed to the brim and eating without a care in the world made her feel so good she was almost aroused. If she had any doubts about wanting to gain weight before, now they were gone. Now she was sure, and it was more than just eating whatever she wanted, whenever she wanted. It was eating for a purpose, eating to gain weight, eating to get fat, eating to feel as excited and sexy as she felt right now at that very moment. It was the stuffing of pillows in her clothes as a little girl, it was Dominic feeding her donuts and then fucking her brains out, it was posing for pictures with balloons in her chest pretending her boobs were the size of melons, it was all those things. Most of all it was the fact that she had gained almost 10 pounds in the past week, and she felt so good she was almost wet. For the first time in her life she didn’t feel a trace of self-consciousness about her body. As long as she could remember there had always been in a little voice in the back of head telling her to suck in her stomach, or questioning if she might look fat if she turned her head at a certain angle, no matter how skinny she was. Now she felt fearless, serene and high, this trip was the nail in the coffin that sealed her desires and she felt blissfully secured in her wants for the first time.