You are here: Products Callisto Megabundle by Erica Conroy 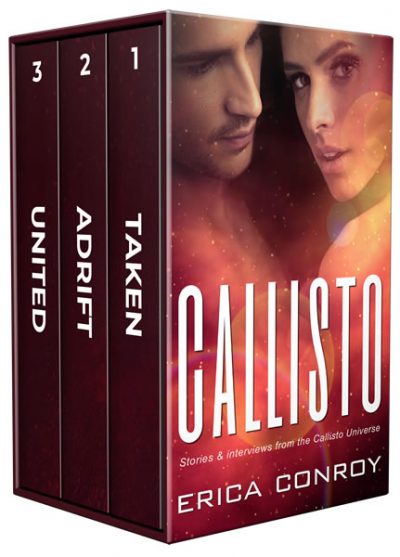 Come aboard the Alliance starship Callisto for a journey filled with action, humor, romance, and suspense!

Erica Conroy lives in New Zealand–otherwise known to the rest of the world as: that pretty scenic place where they made the Lord of the Rings and Hobbit movies. She spends most of her time writing (also procrastinating), reading, hanging with her long suffering husband and frolicking with the neighbour's cat. As a writer Erica delights in plotting evil and writing it all down for others to read and enjoy/despair-muahahahahahahahaha!

Oh, and she also likes LOLcats 🙂

Even with a plasma blaster leveled at his chest, Viktor Jacobs never let his smile falter. Viktor believed that the moment you stopped smiling, you were dead. This was a belief that he had even clung fast to during his recent divorce. Now he kept it in place because he couldn't come up with an alternative expression.
The representatives of the Lyrissian people stood proudly before him. They were tall, angular and garbed in intricately embroidered robes. Viktor had just greeted them in their own language—at least, he hoped that was what he had just said. He had only had the past month to quickly learn a language that was composed of complicated guttural sounds and hisses.
The men from Space Corps who flanked him were slower on the uptake. Their own plasma blasters were aimed at the Lyrissian leader.
"Oh dear," he said in Common. "I'm supposed to be ushering in the end of a war, not prolonging it."
Someone from the Lyrissian side snorted, and then, also speaking in Common, said, "U-man, you insulted his parentage."
"Did I just?" Viktor asked, eyebrow raised as he sought out the speaker. "That was not my intent."
One of the Lyrissians separated themselves from the pack. Unlike the others, this one bore a hood and veil. It made them infinitely more interesting to Viktor. "I should hope not," was their reply.
"Well," Viktor said, and turned up the smile. "Enlighten me as to where I went wrong, please."
"You hissed in several places instead of grunting," the Lyrissian explained. "A subtle difference, but then I suspect your vocal cords are not capable of creating the distinction."
"Ah," said Viktor. "I can see how that would lead to this. Please let the esteemed representative know that I did not intend to insult him, his ancestors or his descendants. It will not happen again. Well, it will, but it is unintentional."
The speaker translated Viktor's words into the Lyrissian language, and when he finished, Viktor inclined his head to convey his apologies. The leader grunted and weapons quickly disappeared. After a glance from Viktor, the Callisto's second-in-command ordered her personnel to do the same.
"Thank you," Viktor said to the fully clothed Lyrissian. "Does anyone else speak Common?"
"I am the only one," was the response. "It is why I am here."
"Excellent," said Viktor. "And you are?"
"I am S'rea, daughter of Tarn," she said.
Viktor couldn't stop his eyebrow from shooting up his forehead. No one, as far as he knew, had ever met a Lyrissian female. Rumor had it that none existed, yet here one was. "I am honored to meet you, S'rea, daughter of Tarn," he said. "Can you please ask your father and his entourage to follow us to the rooms we have set aside for you all?"
S'rea didn't even acknowledge him and instead turned to her father and interacted with him for a few moments. Whatever it was they said, neither seemed happy. "My father does not require a room. He wants to negotiate. Now."
"Of course he does," said Viktor. "I suppose we can do that."
S'rea turned back to her father once more. Then to Viktor she said, "He has changed his mind."
"Okay," said Viktor. He gestured for them to follow.
"He also requires a tour of this vessel," S'rea added.
Viktor glanced at the second-in-command of the vessel Callisto, who had accompanied him to greet the Lyrissians. The woman nodded once. "I think that can be arranged," he said.
"He also requires access to your onboard library and a separate room for his daughter."
"Would your father also like a bubble bath?" Viktor asked.
"Yes," she replied. A few moments later she asked, "What is a bubble bath?"