You are here: Products California Dreams by Jean Zahn 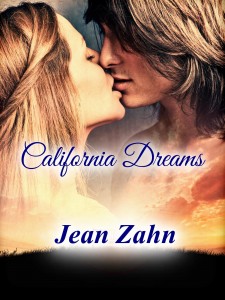 Twin brothers Rory and Paul Brock have everything going for them. Handsome and popular with the girls; they are also blessed with family wealth, they are living on the wild side. Paul is the sensitive one with Rory being the conceited one. Rory lives for the moment and likes to have many girls. He meets his match when he meets Angela Star.

The Star family moves from California to the small town of Lakeside where the Brocks live. Tom Star becomes law partners with the twins father, Steve Brock at the Brock’s law firm. The twins meet the Star sisters. Angela Star is seductive and bewitching. Rory immediately falls in love. He’s never loved a girl before in his life. And Paul finds he has feelings for Alice Star.

Rory will take adventures to New York City and to California. He meets new friends his conservative family certainly would not approve of.

But how long will all this last? Angela bewitches both twins. Who does she end up with? Does she break their bond for life?

You’ll have to read to find out!!

Currently I work as an educator and hold a master’s degree. I have that dream of becoming an author and quitting my day-time job. I have stars in my eyes, that’s for sure!

I love the decade of the 70’s and the culture of rock music. I thought of this book as a kind of rock and roll journey. A fun filled ride of fantasy.