You are here: Products Bury the Lead by Reese Patton 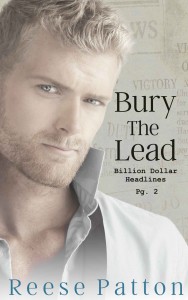 Bury the Lead by Reese Patton

Never a good combination found in any man – and Ian Stirling, publisher of the Daily Herald, possesses all of them and more.

Merideth Gardner starts her first week at the Daily Herald as Ian’s fake girlfriend and the story of a lifetime falls into her lap.

Five more days. She only has five more days with Ian, but instead of focusing on the prize at the end of the agreement, a brand new story steals her attention. A missing woman with ties to Ian and his friend. A mysterious foreign visitor. A young woman in danger. If Merideth worries about them, she doesn’t have to worry about her growing feelings for Ian.

Will Merideth hide her feelings beneath a developing story? Or will she finally stop burying the lead and tell Ian everything?

The Billion Dollar Headlines series delivers a short and sexy novella to your doorstep every two weeks. Perfect for when you want a hot story but don’t have a lot of time. ​Read Bury the Lead while it’s Hot!

Reese Patton lives in the Midwest with her wonderful husband who provides all the inspiration she needs for writing romances with happy endings. They share a house on a lake with two giant yellow Labs who generously keep Reese’s feet warm while she sits at her desk writing.

This is a continuation of Merideth and Ian’s story from Off the Record. Initially I wanted it to be Stones, story, but when I stated writing it, I realized Merideth and Ian needed more time together before I brought in another woman. (Not an Other Woman, but another female voice who complements Merideth.)