You are here: Products Burgundy Gloves by Julia david 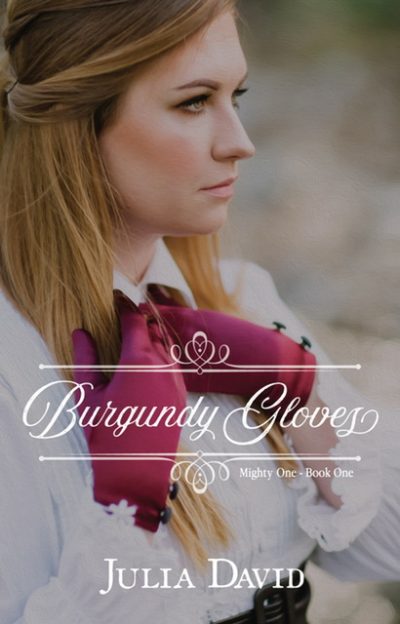 Temperamental Allison Kent finally finds a chance to soar into her dreams of adventure.

But in one tragic moment, Allison’s planned future comes to a halt when she is found at the bottom of a ravine, left for dead.

Levi Graham is a strong independent backwoodsman, who stumbles upon the injured young woman. He quickly finds an uncomfortable challenge in taking on the role of a Good Samaritan. In addition to caring for this helpless, confusing woman, he encounters a robbery, a fire, visits from relatives, and the cabin’s previous owners, all disrupting his peaceful life of solitude and trapping.

In Allison’s desire to be independent, she finds that these strange people carry a deep faith and connection, crumbling her defensiveness. Little by little her future is changing as she weighs the new possibilities. Her mother’s burgundy gloves bring comfort to her confusion and new strength to surrender…to accept a delicate growing desire for love.

Julia David is an avid reader, writer, and communicator. Married and mother to five, Julia works with pregnant and parenting teens. Burgundy Gloves is her debut novel and first in the historical romance Mighty One series. When taking time away she enjoys camping around the Pacific Northwest.

This book was the wanderlust imagination of a housebound mother, doing pool duty one summer. </p>
<p>The Burgundy Gloves where my grandmothers and I wondered what story they would like to tell. While writing for my own joy-one book grew to three. The Mighty One series.

"What is this?" Levi held it up by the corner. "It's a woman's glove." He glanced again at the circling hawks. "What do you make of this, Patch?" He let out a sigh. The dog had already headed back. "Did you find a dead coon wearing gloves?" he yelled after his dog.<br />
Patch stopped and barked, then headed for the creek.<br />
Levi followed, glancing down at the glove. It looked somewhat new. Who would've dropped it out here in the middle of nowhere?<br />
He climbed over a few small boulders and noticed something white against the ravine wall. Dropping his pack to the ground, he climbed up the steep incline. Snatching at the white fabric, he shook it loose; it was maybe a nightgown, something his ma might wear. He threw it over his shoulder and noticed more clothing strewn around the ledge. He plucked a few more items before his head shot up in a startling realization. A hawk’s screeches confirmed his fears—what if a carriage had flown off the edge?<br />
"Patch!" He knew his dog could find them before he could scramble down the ledge. "Patch, what do you see?” He tossed the garments to the dog, "Where are they?” Heart beating rapidly, he scanned the area.<br />
Patch ran a few feet away to a stretch of tall grass. Levi pulled his hunting knife from its sheath. Suddenly jumping back, he saw a large mass of light blue and brown fabric in front of him. "Oh, Lord," he gasped.<br />
Patch began to bark. "Shut up, Patch, I know it's bad." He bent down to the woman’s side and carefully rolled her over. Blood and dirt smeared her face. Blood had never affected him before, but he felt his stomach roll up into his throat. Patch pushed his way in to sniff at the woman’s face.