You are here: Products Bucking Tradition by Gina Cole 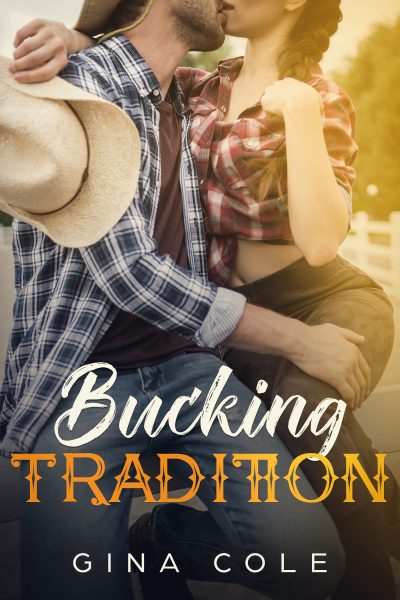 Beth Lanham is a wild child. Aggressive, outlandish , and forward, she tackles life head on – that is, until a sexy bronco rider throws her for a loop. The moment she meets Scott, she is out to knock his socks off , but instead nearly knocks him out. One heated kiss has him falling head over heels (literally) straight into the arena.

Scott McDaniels had never seen anyone so full of life and vitality as Beth was. Kissing her was like holding a live wire in his arms. When they touched, sparks flew! Which is why when he’d asked her out, he was shocked that she had ditched him. He was so close to realizing his goals, that maybe being stood up by her was both a blessing and a curse?

Beth had judged her cowboy based on looks alone , but found that he had so much more to give- if only she’d have bothered to look. Scott finds that behind Beth’s outrageous facade is actually a scared young woman. Could it be that both of them were hiding behind masks of their own making? And that perhaps they were a perfect match after all?

Ginny Sterling is an avid romance writer. She enjoys telling tales that tug at the heart. She enjoys reading and creating stories that leave the reader smiling, laughing or crying. She mostly writes Western Romances Books – including The Lawkeepers. She also writes Contemporary romance, as well as the Timeless Brides Series (Time travel romance) under the pen name, Gina Cole.

Having lived in several different parts of the United States, she and her family have settled in Kentucky. She spends all of her free time writing, quilting, or shopping for coffee mugs to add to her collection.