You are here: Products Broken: Taylor by Hildie McQueen 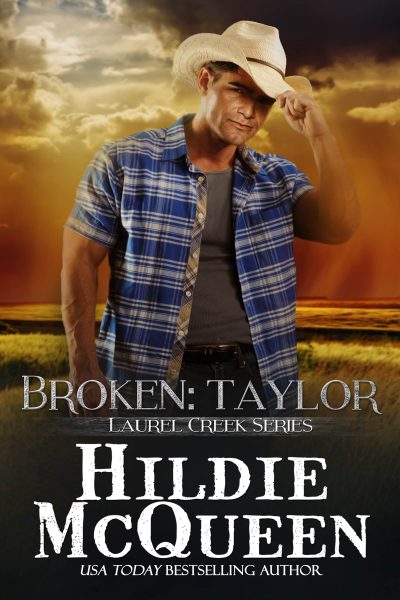 Ex-detective Taylor Hamilton is broken. After the devastating loss of his children and parents, his marriage crumbled and fell apart. Besides the grief, he is tortured daily by intense pain after a job related shooting. Not willing to allow the reality of what his life has become, he finds a way to deal with it that could make everything worse.

Allison Brennan has one huge reason for returning to her childhood home of Laurel Creek, Montana…Taylor Hamilton. Looking for a fresh start after a failed relationship, Allison opens a flower shop and sets her sights on the ex-detective she’s loved since high school. Unfortunately the main obstacle in the way is none other than Taylor Hamilton.

Do Taylor and Allison have a second chance at love, or will they destroy each other in the process?

USA Today Bestselling author Hildie McQueen loves unusual situations and getting into interesting adventures, which is what her characters do as well. She writes romance because she is in love with love! Author of Highlander historical, western historical and contemporary romances, she writes something every reader can enjoy.

Most days she can be found in her pajamas hiding from deliverymen while drinking tea from her David Gandy coffee mug. In the afternoons she browses the Internet for semi-nude men to post on Facebook.

She resides in beautiful small town Georgia with her super-hero husband Kurt and three doggies.

When I wrote the first book in the Laurel Creek series, Jaded, I didn’t know what to expect. I knew the heroes would be older (in their mid forties) and my type. Tall, handsome and muscular.

Another thing I planned was that they would each be damaged in a different way, but other than Luke’s PTSD, I wasn’t sure what the other hero’s back story was yet. I remember when Taylor first made an appearance and how much he stood out.

Knowing what I had in store for him, my heart broke and I almost didn’t write everything into his story that I’d plotted. However, a story goes where it wishes to go and in the end, Taylor suffers a lot of losses in this book.

It is my hope that regardless of the tragedies in this hero’s life, you feel hopeful and are smiling when you read the last page.

I feel it is realistic that after devastating loss and hurt, a person comes out stronger and realize that there is still hope for a wonderful life and bright future.

Spoiler Alert! Taylor’s cousin Eric’s story is entwined through this book. Eric and Mindy’s story will conclude in Tobias’ book, Ruined: Tobias, which will be published in mid 2018.

If you’re wondering what to expect in Tobias’ book, I will only say that you are in for a surprise or two. How do I know this? Because although I have no idea what is coming, several times while writing Broken, I know that certain things with Tobias aren’t as perfect as they seem.

So hold on to your Stetsons, there is much to come in the Laurel Creek series!! I’d love to hear back from my readers with your impression of Taylor’s story Broken: Taylor, The Laurel Creek Series.

“It’s over. We’re not doing this again Taylor Hamilton.” Felicia’s barely held rage emanated through the gritted words. She slid from the bed stalking to the dresser.
Her lean, sinewy body, strong and slick with sweat, caught his attention. Disregarding Taylor, she darted about gathering her discarded clothing. The night before had been great, and the sex, totally physical, as always hit the right spot.
However, this morning after another round of sex, passion the mood was replaced by something totally different. Anger and even disappointment perhaps.
The female police detective gave him a flat stare. “This has been a mistake from the beginning. I don’t know why we even keep hooking up.”
“I don’t do weddings. Why is it such a big deal?” Taylor sat up in the bed, his back against the headboard.
It was surprising that he couldn’t see his breath when he huffed. The damn hotel room was like a meat locker that morning. Taylor pulled the blanket up across his chest. He’d hoped to stay under the blankets for a couple hours longer. Judging by how things were going, he decided it was best to get up.
Eyes narrowed, Felicia closed the distance between them. Pointing her index finger at his face, she shook her head. “It’s not just the wedding. It’s everything. I give no damns about the wedding. It’s that fucking self entitlement vibe you’ve got going lately.”
Not sure where the conversation was going, he blew out a breath. “You didn’t have to come here.”
“Your ass could have driven the extra half hour to my house.”
“I have to get up early. I’ve told you that. Plus I don’t want to be around if your family pops up. It would give the wrong message.”
Felicia threw her hands up in the air not seeming to care she was totally nude. “Oh. My. God.”
Instead of waiting for the explosion that was sure to come, he rolled to the other side of the bed and grabbed his jeans. Just as he yanked them on, Felicia stalked back toward him.
The first slap sent his face sideways, the second made his eyes cross.
“Kiss my ass Taylor Hamilton. I wouldn’t bring you around my family.”
Noting the telltale shine of unshed angry tears, guilt punched him in the gut.
They’d never made a commitment to each other. Their relationship consisted of hooking up a couple, sometimes three, times a month. It was sex only. That was the agreement.
Felicia and he had been partners up until he left the force. After he’d retired, they’d met on occasion for lunch or to shoot the bull. One night it changed, and since then they’d gotten together every so often. Mostly for sex.
Today she was angry. Something was up. Yes, he’d promised to come to her place, and then the next day to a wedding, but had decided against it at the last minute. Usually Felicia would have taken it in stride and not made such a big deal about it.
She was dealing with something and he was the easiest, closest target or letting out her frustration.
Before she could turn away, he grabbed her arm. “What’s really going on here? What happened?”
Her eyes shifted and shoulders fell. “I shot someone yesterday. Damn it. I killed a damn teenager.” Shrugging off his hold, she began yanking on her clothes. “Stupid punks think they are immortal.”
The first time he’d killed someone, it was during his second year as a police officer. The time he’d shot an armed robber. At first Taylor had been satisfied because he’d saved the convenience store clerk’s life. But when they’d removed the robber’s mask to the face of a dumb kid, his guts had been in knots for weeks.
He pulled Felicia against his chest ignoring her struggles until finally she went limp, her tears wet on his bare skin. “When you go and meet up with the shrink, be honest. Don’t hold back. I know it seems stupid, but it’ll help.”
“Shit.” Felicia pushed away, wiping at the tears. “I better go.” Her dark brown eyes met his for a long moment. “Sorry about the slap. You’re a good man, Taylor Hamilton. Give yourself a chance to meet the right woman and settle down.”
“You got a hell of a swing. It was two slaps.”
Taylor studied the pretty woman. Hopefully she wasn’t about to suggest a relationship between them. There was nothing in him to give and he wasn’t about to allow anyone, including Felicia, to settle for him.
She was young and beautiful. Had just turned thirty-four. Smart and a go-getter, she had a bright future ahead of her. He was glad she’d not grown to want more from him. The last thing she needed was to be saddled with a forty-six-year-old broken man.
“Hey.” He took her arm and tipped her face up to meet his gaze. “I am sorry about being selfish and shit. You deserve better….”
“Get ahold of yourself Hoss. I don’t want more from this…from you. We are and will always be friends. But this.” She motioned toward the bed. “This part is over.”
“Okay. Yeah. As long and we continue to be friends I’m cool with that.” Relieved they could always be frank and upfront Taylor hugged her again.
Both finished dressing while talking about the week ahead. It was as if a cloud lifted and they were back to being partners, friends.
“See you around Hamilton.” Felicia picked up her overnight bag and walked to the door.

The air on his face was just what he needed. Taylor’s four-wheeler crested a small hill and his great-great-grandfather’s cabin came into view. The home had once belonged to Marcus Hamilton, his namesake, was the only structure that remained mostly intact.
Although his family called him Taylor, his first name was actually Marcus. His mother had always called him by his middle name and it had stuck.
Eric came up on his right. “Think someone’s in there?”
“Nah. The door is hard to open and unless she’s industrious, there is nothing in there that makes it remotely accommodating.”
“This window is broken,” Eric said inspecting a small side window. “Didn’t Tobias empty it not too long ago?”
Taylor nodded. “Nope. He hates snakes and a mama snake decided it was the perfect home for her family.” It was hard not to laugh of the memory of Tobias running out and doing some sort of freak-out dance after spotting the nest of snakes.
They pulled up and cut off the engines. Taylor allowed Eric to go first. Although he’d medically retired from law enforcement, he was not in the mood to play cop.
“Stay back,” Eric said, holding his hand up. “Someone’s in there.” The change in his cousin was obvious. All cop. He pulled out his weapon and stood to the side of the door. “Police. Come out.”

The perpetrator turned out to be a raccoon, which wasn’t at all impressed by Eric’s tone. They decided to let it be and turned back to the stables.
Taylor could tell by his cousin’s grim face, the guy was worried about the girl.
“You know at sixteen, she’s old enough to know better. If the girl wants to disappear and not be found, there isn’t much that can be done.
“I know. Hate to go back and tell the parents she’s gone. My guess is probably left in the middle of the night. Someone had to have picked her up. She could be anywhere by now.”
“I better get on.” Eric met Taylor’s gaze for a long beat. “Go to that appointment.”
Taylor nodded, knowing he’d call and cancel. So yeah, he had to go eventually and be seen so that the prescription would be refilled. However, he’d go when it suited him.

Be the first to review “Broken: Taylor by Hildie McQueen” Cancel reply