You are here: Products Broken (Discordant Earth 1.0) by Melony Paradise 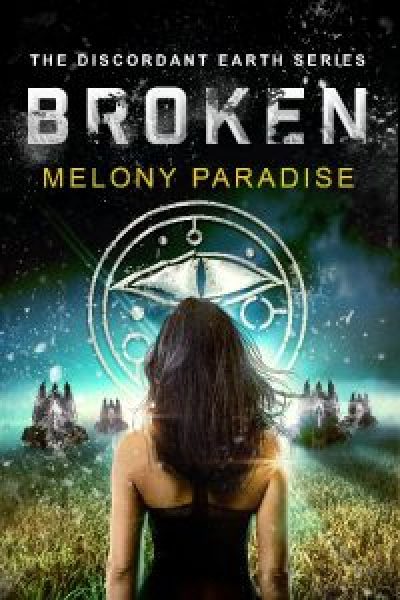 One morning I woke up from a dream that would not leave my head. I mulled it over for another day and night, finally giving in to the compulsion to write the scene. I used that scene to build my outline, write a story, then expand my outline into a series. Since that dream, I haven’t been able to think of much else besides writing.

Alyssa attempted to collect herself as she entered the reception area outside the commander’s office. She cleared her throat, hoping her voice wouldn’t come out shaky. “Isa, is the commander in?”
“He is with the general,” Isa said, in her smooth, cultured tone.
She leaned her hip against Isa’s desk, bracing herself. The beautiful alien regarded her with curiosity, her hairless head almost level with Alyssa’s, despite being seated. As she reached for a pen, Isa’s iridescent, ivory skin glimmered with a barely perceptible lavender highlight.
Like Alyssa’s loyalty brand, the large eyes of the Szu’Kara race were like a cat’s, but without the iris. They came in a range of stunning metal or gemstone colors, with the darker hues often concealing the thin pupil. Shimmery gold marbled the surface of Isa’s brilliant white eyes, which looked like precious jewels set in her elegant face.
“Do you need assistance, Alyssa?”
“Sorry, no.” Alyssa tucked a lock of hair behind her ear. “I need to speak with the commander alone. How long has the general been in there?”
“Nearly two hours.”
As personal assistant to the commander of the Szu’Kara race, Alyssa had worked with Isa on many projects. Although the Szu’Kara had been on Earth since she was two, working so closely with the commander required a deeper knowledge of the alien society she just didn’t have. Isa had been an invaluable coach, causing Alyssa to wonder, on more than one occasion, if her own position was more… superficial. Having acted as the official greeter when human delegates visited the Command Compound, she’d felt like set dressing more than once.
With a deep sigh, Alyssa stood, smoothing her black pencil-skirt. Just as she reached for the palm-scanner, the door swooshed open to reveal General Ras glaring down at her. She put on her most polite smile and stepped back out of his way.
“Hello, General.”
“Miss Rose.” His grating voice seemed to crawl up his throat with great effort.
“Anything I can help you with today?” She folded her hands in front of her, knowing full well how he’d react.
Ras continued to scowl at Alyssa with narrowed, silvery-gray eyes, which as usual, flashed with disapproval, and briefly, she pondered the length of that stick up his ass.
“No,” he said, jutting his chin out, the light reflecting dully off his grayish-blue skin, emphasizing the gaunt features of his long, triangular face. “I need nothing from you.”
Alyssa pursed her lips, holding back a grin, and rolled her eyes at an amused Isa as the general stalked away. Stepping into the office, she chuckled at the churlish general.
“What is so amusing?” Kayn’s baritone voice bounced off the cavernous office walls.
“Oh, uh, nothing, Commander.” In the office, respect was always required, regardless of any outside relationship.
The Szu’Kara were sticklers for propriety, although they tended to tolerate more from the humans they favored. Their own word, kara, loosely translated to mean elite, noble, or leader, depending on the context, and every alien born of the commander line received a name that included ’Kara.
Alyssa glanced across the office to where Kayn stood behind his desk with sunlight filtering in through the tinted picture window behind him, casting a halo around his silhouette. A large lamp shined from the corner of his desk, making his dark face glow, halting Alyssa in place, her heart skipping a beat.
“Ras amuses you.” The corner of his mouth turned up, a gleam in his eye.
With a quick shake of her head, Alyssa rushed to her desk in the corner of the dark office, feigning interest in a stack of files. She smoothed down the hem of her lavender silk blouse, tucked a few strands of hair behind her ear, and steadied herself.
“Kayn, I have something to tell you. Is this a good time for a private conversation?”
Alyssa sensed Kayn’s presence at her back before his hand touched her shoulder, long fingers sliding up to caress the curve of her neck. Taking a deep breath, she turned to gaze up into his liquid gold eyes, mesmerized by their beauty as she considered how a baby would affect their burgeoning relationship. She couldn’t imagine not being able to touch his silky, steel-blue skin or feel his long, slender fingers sliding through her hair. The thought sent tingles down her spine.
Pull it together, girl… don’t get distracted. This might change things, but he still cares about you. He knows you’re a dedicated employee, so there’s nothing to worry about.
Alyssa dragged her almond-shaped eyes away from his all-consuming gaze, her pulse racing as nervous butterflies fluttered in her belly. Stepping back, Kayn seemed to study her like a treasured specimen, his sharp, regal features giving him a commanding presence that demanded respect.
“There is much work to be done, but I will allow a short break if it is important.”
“It is.”
“Shall we sit?”
“Yes, please.” Alyssa drifted to the sitting area across from her desk, hesitant with nerves. “I’m sorry to interrupt your day, but I have some… news I need to discuss with you.”
Perched on the leather sofa together, Alyssa turned to face Kayn, placing her trembling hand in his as he cradled it in his large palm, nearly distracting her again. “What do you need to tell me, my dear?”
Alyssa blew out a shaky breath. “I had a doctor’s appointment this morning.”
“Yes, it was on the schedule.”
“It was at the prenatal clinic. I, uh, had a pregnancy test done. It was… uh.” Oh, hell.
“Yes?” Kayn’s face remained emotionless. Not curious, not concerned—not anything.
A lump clogged her throat, threatening to choke her, and with a gulp, she blurted it out. “I’m pregnant!”

Be the first to review “Broken (Discordant Earth 1.0) by Melony Paradise” Cancel reply