You are here: Products Broken Disciple by Jules Crisare 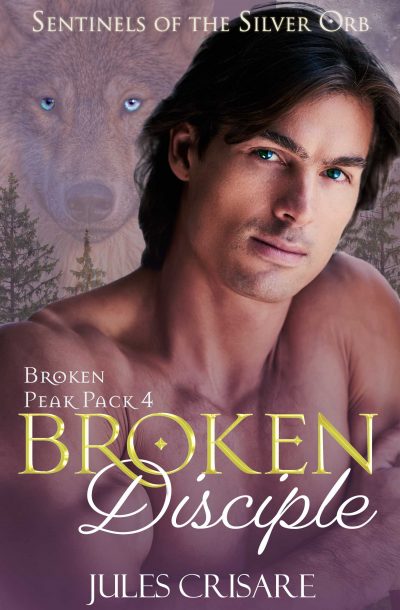 Finley doesn’t want or need a mate. Broken Peak isn’t safe for a female or pups. But when a female he’s never met is threatened, he’s convinced the only place where she’s safe is at Broken Peak. Living with the Pack and him. As his mate.

Maggie Iotor is running for her life to a rumored place of safety and finds a sanctuary she didn’t think existed for shifters. But she needs to leave Broken Peak behind to keep the shifters who live there safe from the deranged leader of her clan set on finding her and bringing her back at whatever cost.

Can Maggie accept everything Finley and Broken Peak can give her or will she walk away from it all and turn her back on the wolf her animal has claimed as her mate?

Jules Crisare loves writing sexy shifter romances. The growly and dominant males of Broken Peak and the Silver Sentinels are the ones bending to the strong wills of the smart heroines who cross their paths. Seriously, only strong heroines need apply to capture the hearts of these sexy alphas.

Born and raised in the Midwest, she hopped from one coast to the other for several years before moving back to the Midwest. If she isn’t at her laptop writing and it’s not football season (Go Pack Go!), she’s reading, knitting (she has a serious addiction to yarn), dehydrating fruit, or testing small batch bourbons for her Old Fashioneds.

The inspiration of this book came from the podcast American Scandal about a murder. As soon as I heard it, I knew just the place Maggie was running from and who she would run to.

A wolf pup barreled out the front door of the log cabin Maggie had been watching for the past week. She knew the pup well enough. He was a curious sort, always ready to play with the older and much bigger wolves, who were all surprisingly patient and gentle with him.

She sat up on her hind legs and squinted her eyes.

Her raccoon’s day vision wasn’t as good as her night vision, so she couldn’t see much during the day when the pack seemed the most active. Once she arrived in their territory, Maggie hadn’t shifted back. She’d been in her animal body for so long, she worried that the animal would take over. The longer her kind remained an animal, the more difficult it was to push the animal back inside. It was a risk, but one she was willing to take.

Necessity couldn’t always live in the same place as options and decisions.

She read that somewhere.

She remembered it was from a book of proverbs.

Not that Book of Proverbs. No way in Hell Zachery would allow that particular book to contaminate the bookshelves of any member of the Gaze. No. The only books any member had been allowed to read had to be approved by Zachery.
She had followed the directions left for her, which was how she found herself in the middle of a remote area of the Appalachians and stuck inside her animal for the past week. Maggie needed to make sure the X at the end of the map didn’t lead to some place worse than the one she came from.

So far she’d pieced together that bears, wolves, mountain lions, a coyote, a badger, and something she couldn’t identify because whenever it came out, her raccoon took over, locked the woman side of her inside, and hid in the hole in her tree. Except for the not-human beastie, as far as Maggie knew, none of the kinds of shifters living in the region allied themselves to the Gazes.

Well, that was something you didn’t see every day.

The pup was running right to her. And scurrying along over the brown grass in front of the pup was a tan little rodent thingy sold in human pet stores.