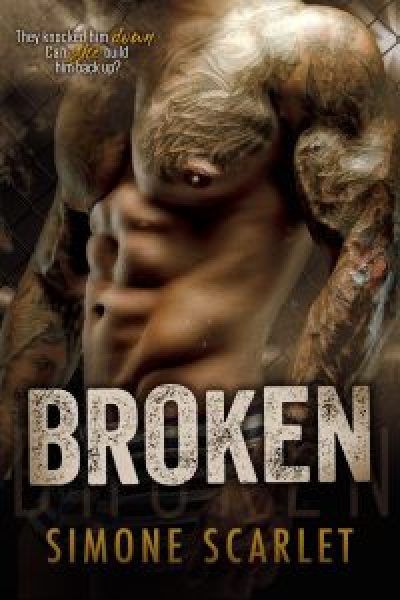 ‘Broken’ is the powerful tale of two wounded people, finding healing in each other.

His last fight put super-heavyweight Silas Batras in a wheelchair – but he’d been ‘broken’ long before that.

Young, dumb and hungry, Silas had fled to America from Spain, chasing his dream of MMA stardom. But the price of that opportunity had become more than he could bare.

First, he’d wound up becoming a married woman’s plaything, just to pay his bills. Then he’d risked everything for his shot at the championship – and wound up nearly crippled, instead. Now he was alone, penniless, and learning to walk and fight again. His dream had become a nightmare.

But that was before Silas met HER – and suddenly, he had something real to fight for again.

Time and again, Lyssa Meadows had followed her heart into the wrong bed, and the wrong decisions – but this time, it had been especially devastating.

She’d been swept into a love affair with two men at once – or, at least, she’d thought it was love. Instead, Lyssa had wound up devastated – kicked to the curb like she was nothing.

Left at her very lowest – ashamed, lonely and scared – Lyssa thought she had nothing left to live for. But then she met Silas. A broken man, chasing a broken dream.

Could Lyssa be the one to build him back up? To rebuild his future, and put him back in touch with his past?

And could she find something true and meaningful in her own life, along the way?

Can two broken halves combine to make a beautiful whole?

Vividly set in the beautiful vineyards of Spain, the mean streets of New York, and the bright lights of Las Vegas, this 95,000 word novel tells the story of an MMA fighter seeking redemption, and a feisty young journalist looking for love.

Explicit, emotional and exciting, BROKEN is a full-length novel, and climaxes with a HEA and no cliffhanger. Enjoy!

I take a lot of inspiration from Jilly Cooper and Fiona Walker, who did similar things with their books on equestrian sports, or life in the village of Oddwold. But I also take a lot of delight in writing in a fast-paced, masculine style mirroring Ernest Hemingway and Ian Fleming.

I’m a passionate fan of mixed martial arts, and sexy, steamy romance. I was inspired to combine them in my stories!

Silas looked up from his chair, at the pretty young woman standing in the doorway.
She must have been in her early thirties, and she looked like those years had been pretty fast-paced. She was lean and rangy, in a conservative sweater and Sarah Palin glasses that didn’t cover up her rockabilly haircut or the tattoos on her wrists and neck.
“Salud,” Silas nodded at her.
“Hi,” the woman extended her slender hand. “My name’s Lyssa Meadows. I’m with the Herald Tribune.”
Silas shook her hand disinterestedly.
“I was just wondering if I could ask you some questions, before the fight.”
Batras narrowed his eyes.
Whoever this chick was, she’d been crying. Her nose was red, and her eyes were bloodshot. Her mascara looked like it was valiantly trying to hold its shit together, but he guessed one more sniffle, and she’d have it running down her cheeks like a panda bear.
For a moment, he felt like asking what the matter was. She was a pretty young woman, and he felt a natural urge to comfort her.
But then he snarled, and remembered what he was here to do.
Fight. Fight, and win.
Who gave a shit about this chick?
Nevertheless, he couldn’t help but wonder what was wrong…