You are here: Products Broken Alpha by Jules Crisare 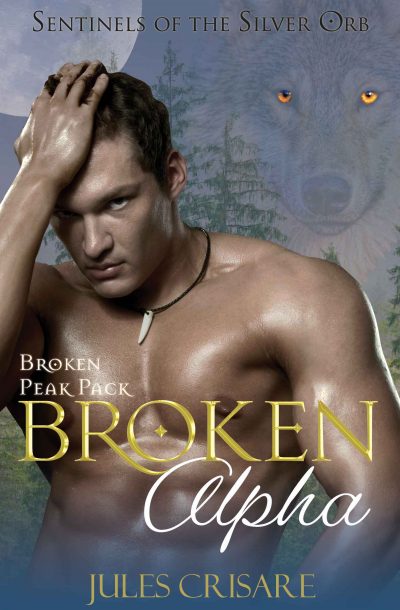 Bray isn’t a good man, but he’s a good wolf. He has one goal – keep his pack of young dominant males from killing each other. Bray’s wolf has another goal in mind. Find a mate. When a female strong enough to handle his pack crosses his path, she’s perfect for him. Vixen is smart, sexy as sin, strong, and fierce.
There’s only only problem. She’s not a wolf.

Vixen isn’t a good woman, but she’s a good assassin. The only thing she cares about is staying one step head of the team sent to retire her. When Bray saves her life, she falls under his protection, and the Alpha wolf wakes up more than the emotions she keeps safely locked away.

Vixen is the mate Bray has been waiting for his entire life, but to keep his pack safe Vixen needs to disappear. Bray has to convince her to stay, or the shifters will lose their sentinel, and he’ll lose his mate.

Jules Crisare loves writing sexy shifter romances. The growly and dominant males of Broken Peak and the Silver Sentinels are the ones bending to the strong wills of the smart heroines who cross their paths. Seriously, only strong heroines need apply to capture the hearts of these sexy alphas.

Get your shifter loving fingers ready to turn those pages and explore the world of the Sentinels of the Silver Orb.

The young males of the pack were fighting. Again. They fought all the Damn time now.

As they reached maturity, their wolves urged them to find their rank within the pack. And as the young males of the pack matured, the need for a pair leading them became a necessity.

Bray pressed his face against the palm of his hand and bit back the curses threatening to break free.

A healthy pack had two alphas. A male and a female. Usually mates. He didn’t need anyone to tell him he needed to find a female. The ache his wolf caused him was enough of a wake-up call that the time for Bray to take a mate had long passed. But not just any female would be able to handle the young male wolves that made up his pack.

Dominant wolves with issues were a concern for any pack, but when an alpha took on several of those wolves, the problems compounded. Bray was doing his best to wrangle a pack of misfits, but he failed as often as he succeeded in keeping them in line.

The woods at the edge of the front yard of the lodge called to his wolf. Recently, the woods called to him more and more. Instead of spending time with his wolves, the way a good pack Alpha did, Bray spent his time patrolling the Broken Peak’s pack territory alone. The isolation was the only thing that satisfied his wolf and kept him from leaving to hunt down a mate.

Someday, hopefully years from now instead of months, one of the idiots in his care would challenge Bray, and he’d lose the pack. Until then, Bray would do what he could to keep his wolf calm and give his band of misfits a stable environment before they left to establish their own packs.

He stared at the forest. Less than a hundred feet away from the front of the lodge. The urge to run tonight was stronger than ever. But instead of patrolling the borders, his wolf wanted to head to the waterfall.