You are here: Products Brody: The Bang Shift by Mandy Harbin 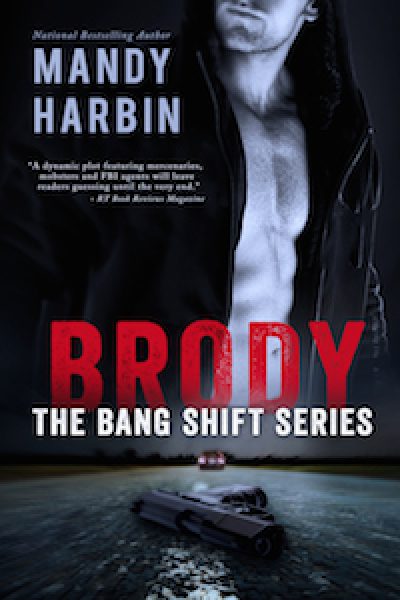 Brody “Brutus” Jackson isn’t your average small-town mechanic. The shop where he spends his days doubles as the headquarters for the mercenary group he works with. They jokingly call themselves the Bang Shift because the government contracts they take are the less savory ones, and they’re all just shady enough to do what’s necessary to get the jobs done. As far as Brody’s concerned, it’s the perfect arrangement for a man with no memory of his past, and no hope for the future.

Under FBI protection, Alexandria Collins and her son have been in hiding for ten years. When it’s time to move again, her piece of crap car breaks down and the man giving her a tow is the biggest, hottest guy she’s ever seen. She is determined to ignore the need her long-neglected body hungers for. After all, the last man she showed interest in put a gun to her head.

Brody thinks the skittish Xan is sexy as hell, but it’s not her hot body that has him rocked to his core. He knows her from somewhere, and in his line of work, that’s a dangerous thing. Following orders have never been this hard, but when he finds out she’s his next assignment, he will protect her at all costs … even if what she needs protection from most is him.

Be the first to review “Brody: The Bang Shift by Mandy Harbin” Cancel reply