You are here: Products Breeding My Wife by J.R. Williams 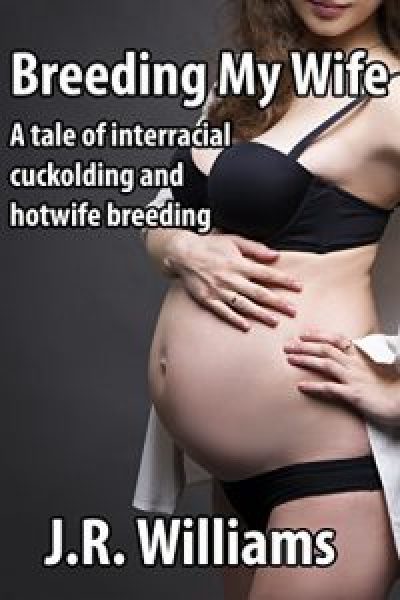 Breeding My Wife by J.R. Williams

John had a fine time during his honeymoon … but his wife and her lover had the time of their lives.
When the three of them had arrived in Jamaica, it hadn’t taken Khloe — John’s wife — and Calvin — her lover — much time at all to get each other out of their clothes and into bed, and to send John to the store to fetch champagne.
But what had started as an innocent getaway for Khloe and Calvin to celebrate their lovemaking had turned into a more lurid affair after Calvin started pimping Khloe out to the local studs. While Khloe was reluctant at first, the last of her reservations faded away as she let a group of eight horny, Jamaican studs have their way with her, covering her face and filling her pussy with their cum.
But that hadn’t been the end of it.
Over the next several days, word traveled fast about the gorgeous white whore with a tight pussy, big tits, a plump ass, and a pretty mouth that she knew how to use. John was forced to watch as his new wife got on her knees for guy after guy, wrapping her pretty red lips around cock after cock, getting them nice and hard so they could slide themselves into her drenched pussy.
And he watched as guy after guy drained his balls into Khloe’s well-used cunt. John watched this carefully, because he knew that after a client blew his load in Khloe’s pussy, he would be forced to lap all of the cum out of her pussy, getting her ready for the next client.
John had to admit that he had come to love that particular part of the arrangement. He was becoming acquainted with the taste of semen and was discovering that he rather liked — even craved — the taste. And digging his eager tongue into his wife’s well-worn cunt was starting to become the only sexual contact John ever had with Khloe. He cherished it.
And that’s exactly where he found himself on the last night they were in Jamaica. He’d watched as three well-built locals — two brothers and their cousin — took turns plunging their dark, monster dicks deep into John’s wife.
As he watched, Calvin stood watch over everything to make sure Khloe was okay — and to make sure John didn’t touch himself unless he had received permission. That had become the norm since Calvin had essentially taken over as the man in their three-way relationship. John wasn’t allowed to so much as fondle his balls unless Calvin gave him permission. His cock was rock-hard watching his wife ride one of the young men’s thick black cocks, stretching out her pussy, as one of the others fucked her throat, stretching out her mouth.
John turned timidly to Calvin as they watched Khloe service her paying customers. “May I … may I touch myself now, sir?” he asked.
Calvin turned and looked at John in disgust. “None of us wanna see you playing with your pathetic little weenie,” he said. “Besides, you haven’t earned the privilege yet. Tell you what. After these boys get done using up your wife’s hot little cunt and filling it full of their black seed, as you’re cleaning her out for the next group of guys, slurping out all that sticky cum, you can play with your little dicklet. You can even cum, if you’re quick about it.”

Be the first to review “Breeding My Wife by J.R. Williams” Cancel reply