You are here: Products Breathe for Me by Natalie Anderson 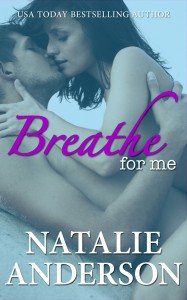 Breathe for Me by Natalie Anderson

The last thing Chelsea Greene wants is to be rescued, but that’s exactly what happens when she’s caught wearing nothing but her swimsuit during a midnight emergency evacuation drill. Turns out her ‘hero’ is a former lifeguard who has no hesitation in offering the kiss of life. So not happening, right?

But for emotionally chastened Chelsea, one touch changes everything. She discovers a desire to satisfy this arrogant, demanding tease. Unable to express her own fantasies, she finds unspeakable pleasure in serving his.

Xander Lawson exudes easy charm. He likes a woman unafraid to match his appetite for unfettered fun. He doesn’t do complicated or emotional. But the raw need emanating from fragile Chelsea compels him closer. He can’t resist spinning a sensual fantasy world around them.

As passion spills outside their carefully selected boundaries, Xander learns Chelsea’s stronger than he first thought. But is she strong enough to handle the intensity he’s always kept hidden?

She lives in Christchurch, New Zealand with her husband, four children and what feels like a million ducks.

I’ve had a hankering to write a longer, hotter story for a while… then this bunch of guys came knocking in my imagination. Lifeguards and ski patrol dudes as students = hot, fit and friendly. Now they’re all grown up, so how could I resist? First up is Xander’s story…

In this scene, Chelsea’s been caught out in a fire drill just beyond midnight. Her handsome-as neighbor has carried her down the stairs. Now that the drill is over she and the other residents are returning to their apartments and her ‘hero’ has oh so kindly loaned her his tee-shirt so she doesn’t feel so exposed in only her swimsuit…
Wearing his shirt was worse than underwear. She saw a few sly looks, and knew just what half the people in the lift were thinking, given most hadn’t seen her in the building before. Same as what she was thinking.
That she’d come from his bed.
The elevator stopped on every floor of course, people taking a painfully slow time to exit. She was awkwardly aware of him standing too close because of the crowd. But even as it thinned he didn’t step away. As she was sandwiched between him and the wall, she couldn’t back away. She grew hotter and hotter as insanely inappropriate thoughts raced through her head. She stared straight ahead.
Get a grip, Chelsea.
It was clear he wasn’t similarly afflicted—not with the joking words he shared with another resident. The heat burned in her cheeks as he walked with her out onto her floor—his hand on her back. Oh so polite. Except for the inordinate amount of skin they were both displaying.
As soon as the elevator doors shut behind them, she stopped and turned to face him. Oh mamma, it was damn hard to verbalize anything when confronted by that body.
“You really don’t need to see me to my door,” she said huskily.
He merely walked around her, strolling along the corridor before turning back to face her, right outside her apartment. His smile was shameless. “You’re wearing my favorite tee-shirt.”
“Oh,” she glanced down and walked the last few paces to her door—where he already waited.
Suddenly he was standing closer than he had in the elevator. She could feel the raw denim of his jeans brushing the outside of her thigh. Wicked laughter danced in his eyes. Too overwhelming.
She looked down at his bare chest. A sprinkling of hair. Flat brown nipples that she could easily reach with her tongue. And a tan. And she’d already experienced the warmth of it, and the hard strength. It was a chest for touching, admiring, tasting. She’d have it beneath her, above her, his arms around her. He had such sensuality emanating from him—challenging her.
A frisson of aggression rippled through her body. She’d never been challenged this way. Never met anyone so blatantly wanting with just a look and a smile.
She didn’t want blatant. When she got back in the scene, she’d be taking it very, very easy. Not squaring off with some playboy. She lifted her chin and pulled the tee-shirt off in a quick movement, letting it dangle on the end of her finger.
“Thanks,” she said, totally feigning moxie.
With a grin he lifted the shirt from her crooked index finger and hooked it into his belt so it hung like a rag down the side of his leg.
“My pleasure.” The polite rejoinder sounded way too intimate to be all that polite. It sounded dangerous. And tempting. He leaned closer, bracing his arm on her doorway—so he took up even more of her vision. Dominating.
“What are you doing?”
“Making a move.”
Oh my. How was that for blunt? “Isn’t there some code of ethics that stops you superhero rescue guys from getting involved with the people you save?”
“Not that I’m aware of.”
“There should be. Women might mistake gratitude for lu—something else.”
“You think you’re feeling ‘something else’ for me?”
“I… no.” Somehow she held eye contact. The way he was looking at her sent flickers of heat along every nerve cell.
“Anyway, I didn’t really rescue you,” he said. “You’d have slid down the banister or something if you’d had to. Really it was all an excuse to get my hands on you.”
“Oh, so you’ve no ethics then.”
“Guess not.” He had that total ‘whaddaya gonna do about it’ look on his face.
And it was obvious what he was going to do about it. The laughter in his eyes was wicked—and mesmerizing.
It was a game. She got that. Except the sizzle that she felt wasn’t entirely playful. It was intense. And as she stared up at him the smile in his eyes and on his lips faded as a predatory look hardened his expression. She raised her hand. Pressed her fingertips on his mouth. To stop him? To touch him? She didn’t really know.