You are here: Products Breaking the Gladiator by Nicola Rose 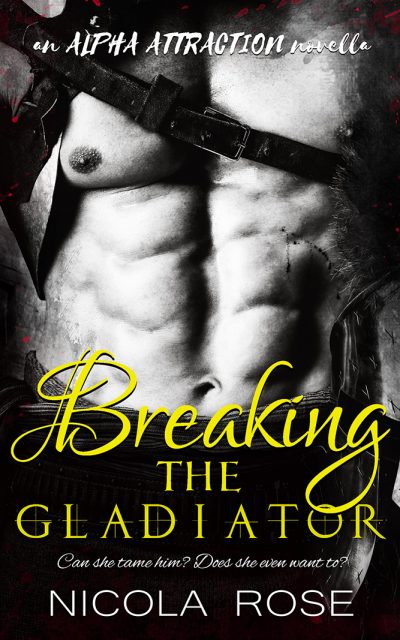 Breaking the Gladiator by Nicola Rose

Livia is a high-ranking woman in Roman society, thanks to her husband’s wealth. On the outside she appears to have it all — but she’s a broken woman. Haunted by a tragic event in her past, and at the mercy of her sadistic husband who revels in her humiliation and sexual degradation.

She finds comfort in transferring that pain along; putting on a brave face and inflicting a mixture of love and hate onto her husband’s prized gladiator, both in the bedroom and out.

Cassian has his own demons, he’s trained to have no feelings other than the desire to kill. He hates Livia. She’s everything that a gladiator abhors. But sometimes he sees the goodness hiding behind her eyes…

Their tempestuous relationship brings danger to them both. If they’re caught, they will be killed. And Livia’s brother-in-law knows exactly what’s going on — he wants a piece of that pie for himself.

Will it all come crashing down around them? Or will love find a way to conquer the hate instilled in them all? Who will be left standing when a gladiator falls for his Domina?

Nicola Rose is from the UK, where she lives with her husband and two boys. When she's not writing or reading she can probably be found walking in the countryside, faffing in Photoshop, and playing board games (with varying degrees of aggression).

You may also find her obsessing over vampires and bad boys…

This book was inspired by the TV series Spartacus. The ideas have been going round my head for years, so I finally gave in and whipped up a little novella prior to my paranormal romance release.

I’m restless, impatient for his turn. Felix can tell. He’s giving me aggravated glares. I clutch my hands in my lap and watch the final parade streaming into the open space before us. The musicians and performers whip the crowd into a frenzy. They can’t wait to see their favourite gladiator either. His popularity has tripled his value in recent months.

And there he is. The prized Thracian. A towering wall of solid muscle. Heavy black tattoos cover his arms, his entire back, right up his neck to his chin. Tattoos are considered a thing of punishment and shame. He has, of course, been branded with our house mark, but it’s tiny compared to those that he has willingly applied. Money earned from his victories in battle has paid for them all, and he wears them with pride. He wants the world to know he is Thracian. Felix allows it because the crowd are mad for it.

Crazy for this true Barbarian brute. Savage and brutal. Exotic and exciting.

He stalks through the Gate of Life and takes his place in the centre of the arena, relishing in the frantic applause and cheering. The procession fades away, leaving only Cassian and his opponent – facing each other, awaiting the order to begin.

Cassian shrugs his shoulders, loosening muscles, and makes a final adjustment to the armour that covers one shoulder. Sword and shield loose in his confident hands. He toes the sand, not a care in the world, and then his head raises, his eyes scan the maddening crowd… and they settle on me.