You are here: Products Break In The Wind by Deb Tadema 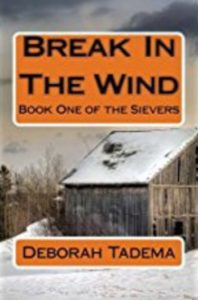 Break In The Wind by Deb Tadema

Author of Break In The Wind, Taken Twice and No Honor Between Brothers. Soon to come, Abandoned Honor.

I have always wanted to write a book. Once I did, I kept going.

A small band of Ojibwa trudged along the flat open grassland many days later. Men, women, and children led dogs that pulled travois beside a fast-flowing river. Dirty faces watched their holey moccasins as they staggered through the tall grass and sandy soil. A small boy clutched at his empty stomach. They didn’t know it, but they had stumbled from Rupert’s Land into Upper Canada.
Pakwis watched the survivors of the storm pass by him. He was Chief now. He was responsible for these people. Guilt plagued his soul. The signs of a bad storm had been there, he had seen the dark clouds. He felt the strong winds. He felt it in his bones! They had hunted during storms before. All they would do was find shelter and wait until it blew over, then continued their way.
No one could remember such a wicked storm, and so late in the season. This one would make a legend of its own. Overnight, his band turned from sixty-six to twenty-three people. He should have stayed home. He could have saved his family. Pakwis and three others had left that morning. The sun was over the horizon then. By the afternoon grey clouds had blown in from the northwest. He should have returned home then. Instead, they kept going. When the full blast swirled down on them, they took shelter behind a narrow ledge into on the lee side of a cliff. One man slipped and fell into the icy river below. It took them a long time to find his body afterward and carry it home.
A child fell and didn’t even cry. Probably too tired and hungry. Poor thing didn’t have the energy. One of the women stopped and helped the little girl up and gave him a sombre look. Pakwis didn’t know where he was leading his people yet. All he wanted to do was to have the Place-of-Sorrows behind them and start anew.
He remembered the first time he saw his village after the storm. Only five wigwams stood whole and untouched. Two other had gaping holes in the sides. The rest were gone. The wood frame, birch-bark, and hide structures never had a chance against such a force. All the other dwellings either burned down or blew away. Three were crushed under huge trees. Litter had covered the entire area. Precious belongings were scattered all over. Clothing, pots, sacred items and sacks of food that had been soaked through were now mouldy. Branches and tree trunks blocked access to people that lay crushed to death in their homes. Everything was soaking wet.
The three hunters had looked for survivors, searching where each lodge should have been. Pakwis heard his friend, Night Wind’s howl when he found his pregnant wife’s body. A branch stuck out of her chest, a look of surprise on her face. His daughter’s lifeless body was underneath a pile of debris. Stealth Man had lost both of his parents. They still had their arms around each other locked in time from when their fire whooshed all over them in a sudden gust. Their wigwam burned down around them. Their bodies weren’t recognizable, but the beads, shells and coloured stones they wore were.
Pakwis had stumbled over to where his own home should have been and found charred remains of one body. He couldn’t identify the blackened corps that had shrivelled up into a ball. He had searched for his other wife with no results, not knowing which one was still alive. As the days passed by, he concluded that Lanick would stay close, and Winda would run. He wiped a tear away before anyone saw it.
For a second, he thought he should track her down and bring her back home. Then he decided not to. His people needed him there, now that he was Chief. His responsibilities kept him with his band, at least until they were settled again. He had helped pull out the bodies, his own wife included. They had built platforms and put them in the trees because there were not enough men to dig so many graves. The ground was still frozen anyway, this was quicker. They prayed for all the dead, then left.
A woman walked by and stumbled. He reached and steadied her. “Thank you, Pakwis.” She smiled at him with a dirt-smudged face.
“You are welcome, Little Blossom.” He walked beside her, following the line of people. Her sad, brown eyes watched the back of the person in front of her. She was pretty under all that mud with high cheek bones and full lips, slender and shapely. A handsome woman, he decided. But not as exciting to look at as Winda. Lanick, he remembered had a straight, dull body that she denied him after he took Winda as a second wife. He had only married her out of obligation to his clan and soon regretted it. She complained and whined about everything. He just didn’t have the patience for her anymore.
He watched the woman beside him. She had lost her husband and two young boys in the storm. Pakwis tried to comfort her as they walked. “We will start a new live, Little Blossom. You will see. Things will get better.” He didn’t sound believable, not even to himself. The spirits just weren’t with them anymore.