You are here: Products Brave New Century by Teena Stewart 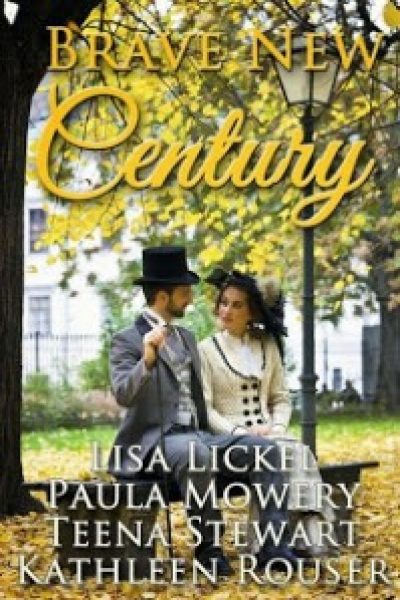 Stories of four young women who are each braving challenges at the dawn of the 20th century in the big city. Will they overcome their hardships and find love?

Each story is written by a different author.

Love and respect in 1899 Milwaukee is as close as a phone call.

When Henry and Jessie meet it seems to be classic love at first sight until a shocking revelation tears them apart.

The Pocket Watch by Kathleen Rouser

Searching for the past an orphan and a young doctor find love for the future.

Flames of Hope by Teena Stewart

Love ignites in the midst of the 1906 San Francisco earthquake and fire.

Teena Stewart is a published author, an accomplished artist, and a ministry leader. In addition to Brave New Century, her recent published books include Mothers and Daughters: Mending a Strained Relationship and The Treasure Seeker: Finding Love and Value in the Arms of Your Loving Heavenly Father. Brave New Century represents Teena’s first fiction inclusion in a book. She and her husband Jeff are involved in “out-of-the-box” organic church ministry in Hickory, NC. For more info on Teena visit www.teenastewart.com

I was asked to collaborate with several other published authors who were working on a compilation of historical Christian romances. Our criteria was that we had to choose a significant event in a major city at the turn of the century. I had lived in the San Francisco area and was fascinated with the great San Francisco earthquake so that is how my story idea evolved.

From Flames of Hope
Gideon held the back of his hand to his mouth and stifled a yawn. It was a little after five a.m. when he left the Hall of Justice which headquartered the police station. Normally, at this time of day, he’d still be in bed and didn’t come on duty until eight a.m. He received an early morning request on his newly installed telephone from Josiah Karleney asking him to trade shifts because of a wife in labor. Gideon had agreed, after wishing him well.
Mid-April, like many San Francisco mornings, was foggy and damp. Seasoned San Franciscan’s knew that even in summer, fog often rolled in making it bone chillingly cold. One dressed in layers prepared for the weather until the mist lifted and the sun, if it chose to show itself, made an appearance. It would be hours before the damp gave way.
He pulled his coat tighter, thinking how nice a cup of Lily’s hot coffee would taste. In the distance the high pitch rapid barks of several dogs carried a note of frenzy. He wondered what had stirred them up. Behind him came the slow clip, clop of a horse. Gideon turned and smiled an acknowledgment to the aged milkman making his rounds.
The gas lights still burned and few people stirred yet, although he spotted a light in an occasional window—early risers getting ready to start their day. He nodded to one lone gent who had his chin pulled down to his chest in an apparent attempt to stay warm as he made his way past to the Hall of Justice.
As he continued up the street, an odd vibration tickled his feet disrupting the tranquility with a low rumbling sound. Moments later, Gideon was thrust from side and side. He stopped in his tracks, legs spread, trying like a drunken sailor to stay upright. Up and down the street windows in buildings rattled. Gideon’s body rose up as if he’d become weightless and his spirit had left his body in some uncanny ability to float.
The next moment he was cast face down on the pavement which rolled, swayed, and bucked like a giant sea monster. He watched in disbelief as the building directly in front of him did a fantastic contortion, leaning from side to side. Bricks toppled, windows exploded, and the top floor opened up and landed in the street.
A chunk of brick narrowly missed his head as a cloud of dust rolled towards him. He scrambled unsteadily to his feet as the ground continued to roll and bend. A jagged crack ran in his direction, widening. He dashed to the far side of the road as it shot past him twisting the trolley rails into a metal wreck. A roar that sounded like a train filled his ears as buildings tumbled. He looked behind in time to watch the Capital Dome topple and collapse; pulverizing nearby structures until only the skeletal outline remained. The Hall of Justice, which he had just left, rained down brick, glass, and metal.
Photos he’d seen in the paper of war scenes flashed through his mind. Screams for help came from all directions. People staggered onto the streets, some dressed, others in night clothes. One man ran blindly past, his face covered in blood.