You are here: Products Boxer Vs. Billionaire by Meg Watson 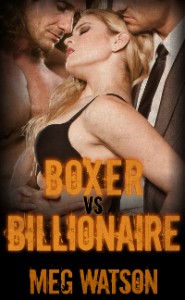 Boxer Vs. Billionaire by Meg Watson

She doesn’t even know she needs them both!

Callie has always fallen in love with the wrong man. Something about her curvy, country-girl strength just attracts alpha males who push her to the limit… and then past every limit.

Auger wants to do right, but can’t seem to stay on track when the only life he’s ever known has been in the boxing ring. Every time he thinks he’s broken away from the violence and gambling, something happens to drive him back to the brutal world of underground fighting.

Billionaire Winsor Cooke has been looking for the right opportunity to leverage his wealth into something even more impressive, but can’t resist Callie’s curves and the chance to tempt Auger back into the fights to make even more money.

When the three of them come together, the results are explosive. They are destined to be together, if they can stop fighting long enough to give in to what their hearts know is right!

I live on the banks of the Fox River outside Chicago, IL with my cranky cat and some kids who won’t stop calling me “Mom.” I love to paint, work on the house, garden for at least the first few weeks of spring, and watch Supernatural and MasterChef. In fact, Gordon Ramsay inspired an upcoming book. Please don’t tell him.

Be the first to review “Boxer Vs. Billionaire by Meg Watson” Cancel reply