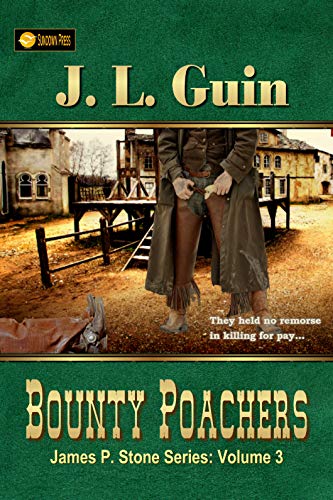 A life of dire circumstances gave need for boldness with a gun…
When Deputy U.S. Marshals James Stone and Jackson Millet recover from being wounded in a shoot-out, their first assignment is to track down two brothers who are bringing dead outlaws in under questionable conditions. When bounty hunters began to be killed as well, Stone and Millet realize they are dealing with bounty poachers.

Jasper and Jason Bain have run onto some hard luck. They need money, and in desperation, begin by robbing stagecoaches and individuals. They quickly progress to bringing in outlaws for the bounty—always dead. When they graduate to stealing the outlaws from the bounty hunters who have gone to the trouble to track them down, they must do away with all witnesses.

But bounty hunter Joe Grebbs was one man they couldn’t kill, and he’s coming after them. Can Stone and Millet get to the Bain brothers before Grebbs tracks them down and murders them for what they did to him? Though Stone is reluctant to put aside the ongoing quest to find his nemesis, Evelyn Laird, this job must come first—before more blood is spilled.

In a race against time, will Millet and Stone be able to prevent Grebbs from having his day of vengeance in the hunt for the BOUNTY POACHERS?

J.L. (Jerry) Guin, a former wholesale lumber trader, had his first western fiction short story published by Western Digest in 1995. Since then, he has penned over 40 short stories, which appear in anthologies such as The Traditional West, Outlaws and Lawmen, Best of the West and many others. He has written 15 novels, the most recent, “Bounty Poachers” third in his 4 volume James P. Stone series. He is a member of Western Writers of America and Western Fictioneers.He resides in the mountains of Northern California with wife and proof reader Ginny

My latest novel, published by Sundown Press, is “Bounty Poachers,” which is volume 3 of a 4 book series. After I wrote the first book in that series , I realized that I had good characters and could carry the story on, so I decided to make it a series (my first)..