You are here: Products Bound to the Elvin King by Lisa Kumar 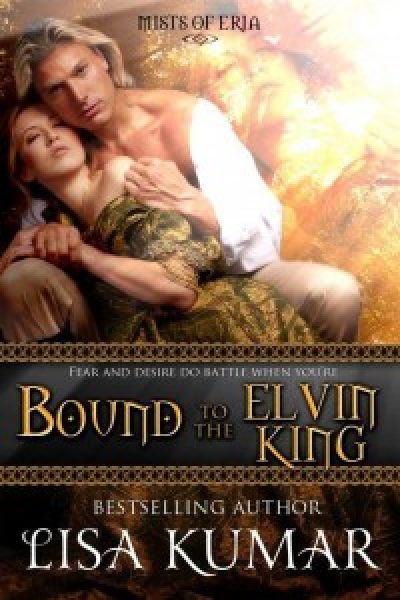 Bound to the Elvin King by Lisa Kumar

After countless millennia as the King of Eria, Talion thought he’d experienced all life had to offer. That is, until Maggie entered his land. The beautiful human whirlwind refreshes his spirit, while all too often trying his patience. Though he desires nothing more than to claim her as his bond mate and queen, his secrets could drive them apart or even end their lives.

Stranded in the elvin land of Eria, Maggie D’Anglio spends her days trying to figure out a way home while attempting to avoid the sexy and provoking Talion. Unfortunately, she’s living in his palace. His world. His rules. The mysterious king intrigues and infuriates her as no one ever has, a lethal combination to her commitment-phobic heart. But when she parties too hard and wakes up magically bound to him, there’s no escaping the irresistible irritant—or her new role in a land on the brink of war with the darkindred.

His past, along with her pride, will threaten their relationship and their very lives. Will they have the courage to admit their love for each other, or will their fears bind them together in death?

Lisa Kumar is a wife, mother, and romance writer who grew up in small-town Indiana. She now resides in the suburbs of Chicago with her husband and two sons. When not spinning tales of romance and fantasy, she can be found with her nose buried in a book, or more accurately, her e-reader. Her scholastic background is in psychology, which enabled her to get low-paying jobs in the human services sector. Needless to say, she’s now writing full-time.