You are here: Products Bound in Fire by Erzabet Bishop 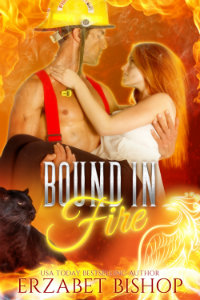 Bound in Fire by Erzabet Bishop

The witch with the phoenix tattoo…

Isobel Fieri loves her dream job of working as an archivist in the city’s most prestigious museum. Well, aside from the creepy advances of her boss, that is. But when her mentor goes missing and a valuable exhibit piece vanishes into thin air, she knows something is very wrong. Bound by her desire to find answers, some really steamy flashbacks, and an attraction to a certain sexy fireman, opening weekend is about to get interesting.

He will find her again and protect her at all costs.

Roark Jameson has never forgotten the mate he loved and lost. He and his cat have pledged their lives to fighting fire, the very thing that took her from them. When he finds himself in front of the Remington Museum, he is drawn in to the mythology exhibit despite himself. A chance meeting will upend his universe and bring his carefully constructed world crashing down around him. Discovering his long lost mate here seems impossible, but when danger roams the hallowed halls of the museum, he must fight for her or lose her forever to the twisted web of fate.

Everyday heroes are all around us. First responders have to remain cool in a crisis and can be the only thing standing between you and death. In Bound in Fire, I wanted to explore the relationship between a cat shifter and his fire witch mate-who incidentally happens to be a phoenix. Fire will push all of their boundaries but the unrelenting love of fated mates will not be shaken. Not even by a greedy dragon with a lust for blood and a woman he can not have.

I hope you will enjoy the start of this new series. Magic. Myth and a bit of my love for museums will peek through the words. Happy reading!

Isobel pulled away and rubbed her hands over her the sleeves of her sweater. “It’s no secret my parents don’t like that we’re dating.”

That was the understatement of the year if he’d ever heard one.

“No.” Roark snorted. He found himself thinking of the colorful phoenix tattoo that now held court on her upper arm. The one, coincidentally, that matched his own. She’d told him she liked the symbolism. A new start. Like the one they’d talked about when they got out of this shit hole of a town.

It was also her answer to his moment of weakness when his teeth had pierced her flesh during one of their secret assignations in the old cabin just up the road. He hadn’t meant to mark her, not yet, but he'd lost control of his beast, accidentally laying claim to his mate much sooner than he had intended. The tattoo had been the perfect camouflage, the bird’s colorful plumage working in the bite marks so if you didn’t know they were there, it was impossible to make out.

Only his nose told him the truth. Her scent had changed, albeit subtly, as his mate. His pack members would be able to tell, so they kept everything as close to the vest as possible.

She glanced toward the darkness of the woods beyond, her expression stony. “Mom told me they knew we had been meeting. That she and Dad hadn’t raised me to date outside the coven.”

Isobel gave him a look. “They saw the tattoo. My mother was pissed.”

“Ouch. At least they couldn’t tell about the bite.”

Unconsciously, her hand trailed up to her upper arm, rubbing the tat through her clothes. “I tried to tell her this isn’t a passing thing. That you’re the one.”

He could just see Dayanara Fieri’s pinched expression after that delightful conversation.

“No. As a matter of fact she didn’t. Neither did my father.”

The knot that had taken residence in his gut twisted. He didn’t really care if they liked him, but if they made it hard on Izzy, that he did care about.

“Izzy…” He reached out to tug her back into his arms but she held out her hand.

“Do I want to know?” Roark ran a hand through his hair, afraid of what she was going to say next. Losing her was not an option. Not for him.

“Apparently there’s been an arranged marriage with someone in Jonastown involved in coven affairs. And as soon as I graduate, I’m to take my place and follow through with their agreement.”

God. She was still in high school.

“Izzy. You know that sounds insane, right? You should be able to choose who you want to be with.”

She barked out a laugh, fire dancing in her eyes. It was a bitter sound that cut him to the quick. “You don’t know the coven.” As she spoke, she cocked her head. “You were late tonight. Why?”

“That asshole uncle of yours held me after. Accused me of an incorrect inventory.”

Isobel shook her head, her fiery strands of hair cascading around her shoulders. “It was to delay you.”

Shit. He already knew that. The question was, why?

“When did you get here?”

“A few minutes before you. I had to sneak out of the house. The parentals were arguing. They didn’t even check the wards.”

“I walked the trail. I didn’t want to take a chance they’d spelled it.” She moved away from him, lifting her face to the moon.

“Izzy…” He growled. She knew it wasn’t safe. Not for a female alone. Firestarter witch or not.

She lifted her face toward his, the ghostly light of the moon on her pale cheeks making her eyes appear luminous. She curled her fingers in his shirt and dragged his mouth down to hers. The sweet cinnamon taste of her lips brought their time together last Friday night to the forefront of his mind.

“Firestarter,” he sighed into her hair. What once had been a terrible nickname had become his term of endearment for her.

Roark’s jeans grew uncomfortably tight and as she molded her body against his, he let out a groan. But then he heard it, a car moving up the gravel road. He broke the kiss, struggling to shake the fog of wanting her that had taken over his body.

He had to remain in control. For both their sakes.

“I hear them.” Her voice was cold. “Sounds like Rory’s old sedan. I knew it wouldn’t be long before they followed me up here.”

“Do you think they put a tracker on you?”

She shrugged. “It could be anywhere. My clothes. A spell someone brushed on me when I was at the meeting after work.”

He would go crazy in a prison like that. Roark ground his teeth in indignation. They had to be stopped.

“What about Wayfarer?” Her eyes were fathomless pools and when he peered into their depths, he remembered the unsettling encounter at Forbidden Ink. He’d looked up the best shops in a hundred mile radius and it was ranked as one of the top three. But what they both got when they arrived was akin to a fortune telling session with needles.

He would never forget the owner’s words when they walked into the shop and he asked to see the selection of tattoos.

“The Goddess picks your ink, boy.” The sultry, dark-eyed vampire considered them both and then pointed at him. “You. Sit. I’ll be with you in a bit.”

And she had. Hours later, after Izzy was done, he’d made an appointment to come the next night only to receive a masculine version of the same tattoo.

The woman…Fae, he half-remembered, contemplated him after she’d finished his ink. “Don’t be afraid to walk into the flames. There’s a reason why the phoenix chose you both, shifter. Just be worthy of her when the time comes.”

What the hell she meant, he had no idea, but if it pertained to Izzy he’d do whatever it took.

But now she wanted to leave to go back there? It was true the town boasted a higher than average shifter population and was home to Cirque Nocturne, but he had never considered that being the destination for their future together.

Izzy cut her eyes toward the road. “There. Or anywhere. We just have to go. Now. If the Bradford Coven puts its clamps on me I don’t know what will happen.”

What she was asking him to do was nothing he hadn’t thought of before. Hell, he’d spent nights fantasizing about where they would go. Where they would live. But all of it hinged on her being older. Out of high school. Then he could officially claim her as his mate and no one could give them shit about it. She’d told him more than once that she’d love to work in a museum. There was a big one in Maberry. Maybe they could head there.

It was too soon.

But dammit he didn’t know what else to do.

She marched to the passenger side of his truck and opened the door. Sliding onto the seat, she closed it behind her with a jarring slam.

He darted to the driver’s side, his cat digging at him to hurry. Move faster. If the coven got their way, he’d never see her again. There was no telling where they were going to send her. But one thing was for certain. They would under no circumstances let him get anywhere near her again.

It was now or never.