You are here: Products Border Aflame by Maria Mendelsohn 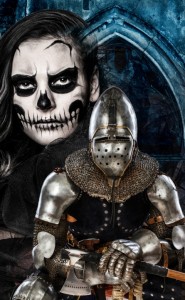 Passions sizzle as destruction looms. Border Aflame is a triple dose of steamy romance set against the background of an invasion by the powers of darkness. It is a tale of high fantasy, of swords and sex, passion and plunder in a world where reality and myth collide.

A small party of mismatched mercenaries race ahead of destruction like the spume thrown up before a storm as an army of brutal trolls invades their world. Step into a sultry fantasy world of fantastical creatures, magic, strapping knights in armor, and the women who use sex to dominate them.

The travelers live, love, and prepare to face death as the scattered forces of humanity try to gather an army to defend their land from destruction.

Maria Mendelsohn has lived in the South Pacific, Europe, and the US. She has been married for more than thirty-five years and has four children, two dogs, and a crabby cat. She has studied martial arts and metaphysics. While her English mechanics aren’t perfect, she still dares to write about fantasy for the love of it and sex because it’s as natural as breathing–Besides, it’s just good, naughty fun.

It’s fun to write about characters who love life and lust after each other the way real people do.

Her body ached with neglect. The calm and solitude gave her mind time to quiet and recognize the hunger that burned in her loins.
Jen carefully brushed away the water that had beaded lower on her stomach, teasing the droplets with the tips of her fingers. She thought back and brought to mind the stroking of Van’s powerful fingers as she gently circled her belly button, running her fingertips around and around. Their relationship had been brief and rather disappointing. It had lasted a few weeks only. Yet she still found herself recollecting his caresses in the dark, empty nights. Her motion changed as she dared to slide her hands slowly down to her inner thighs. Down there, she used her whole hands to stroke the water from her sensitive skin, wiping with a feathery touch. Then softly, ever so softly, she moved her caresses inward, stroking her thatch of light brown hair. She felt her body quicken at the touch. Her heart beat faster and a giddy fire swept through her.
She spread her legs and her questing fingers stroked the moistness of her most sensitive parts. There was an involuntary shudder of ecstasy and she felt her body swell and respond to the probing touch. No longer simply wet from her bath, her vagina was gloriously slippery under her fingers.
Consumed by a haze of sensual fire that blocked out the world around her, she moaned and stroked with a more definite purpose. Her breath became ragged and she felt the lesser twinges of a coming wave as she massaged faster and rougher in her passion. Long fingers became like iron probes forcing themselves inside her hungry orifice with feverish intensity. Roughness that would’ve been painful ordinarily was only blindly stimulating as she panted, edging closer and closer to the climax of the act. Her heartbeat thundered in her head, and as the lean muscles of her body jolted in spasms of pleasure, a shuddering moan escaped her lips.
She relaxed back upon the soft, sweet grass, breathless, her body now covered with a sheen of sweat. After catching her breath, Jen rose and staggered to the pool to clean off once again. She ducked under the water for a quick rinse and washed her body’s slippery fluids from between her legs with gentle fingers.
She felt the irritation of her self-abuse now that the act was completed. It had been a long time for her and she had used herself roughly in venting her pent-up passion. Her body was left tender and she cursed herself silently for her lack of control.
Up to her waist in water, her fingers gingerly massaging her body’s most intimate tissues, Jen’s heart nearly stopped when an inhuman warcry bellowed from across the pond.
Trolls!
She bounded for her weapons, the water dragging at her every movement, miring her usual speed. She splashed and flailed for a moment then was onto solid ground grabbing for shield and spear. By the time she wheeled to face her attackers, the trolls were already sloshing their way out of the pool toward her, snarling like a pack of wolves.