You are here: Products Blow My Whistle by Gin LaSalle 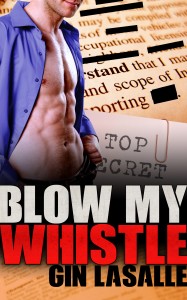 Blow My Whistle by Gin LaSalle

Night shifts at the NSA offices can get awful boring. Kyle is a calm, mild-mannered data analyst who just wants to finish work and go home to bed. But when his boss stumbles across a chain of the steamiest emails either of them have ever seen, the night takes a turn for the hot.

Derek has been working at the undisclosed facility much longer than Kyle has, and he’s no stranger to reading through private, intimate correspondence. It’s always been his secret pleasure.

Stuck alone in the office with a treasure trove of explicit photos, Derek forces Kyle to confront his secret desires, but only if he’s willing to do as he’s told…

This 5000-word story features intense scenes of light D/s in an office environment between a young man and his older boss.

The recent NSA spying scandals and my love of sarcastic, well-written gay erotica seemed like a great mix!