You are here: Products Blossoming Flower by Vivian Winslow 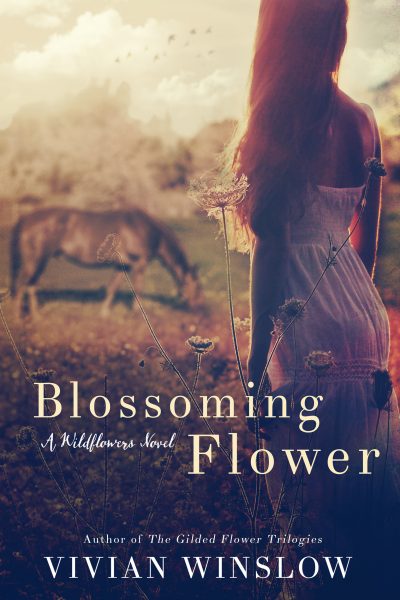 In the wake of the collapse of her father’s business empire, Flor, the gorgeous twenty-one year-old daughter of disgraced former Brazillionaire Gustavo de Lima, is forced to forge her own path in life. Flor decides that none of it—the private jets, the vacation homes and the luxury cars—were real. Or at least they really didn’t matter. The only thing that’s real for Flor is her love of horses and her desire to go to veterinary school. Heading into her final year of college, Flor seeks out the help of an unlikely benefactor to secure a summer internship working with horses. Arriving at the secluded Belo Horizonte ranch, Flor is awed not only by the majestic beauty of the place, but also by handsome cowboy and skilled horse trainer, Collin Taylor. Yet nothing is quite as it appears on the surface. When the hidden past is revealed, will love end up blossoming for Flor?

Vivian Winslow is Elizabeth Hayes’ pen name. Elizabeth was born and raised in San Diego, California but has spent most of her adult life in less sunny and warm places. Never able to call the same city home for more than two years at a time, Elizabeth moved across four continents over a span of seventeen years. Ask her where she loved living most, and she’ll respond, Hong Kong, without hesitation. She recently relocated from New York City to London (for the second time) where she may not be able to find great pizza, but being a short flight to Italy makes up for it.

Since 2014, Elizabeth has written nine novellas in her Gilded Flower Trilogies, as well as five standalone contemporary romance novels in her spin-off Wildflowers Series. A mother of two children, as well as a spiritual advisor and teacher, she was inspired to write these female-driven and inclusive stories to give the next generation more positive views of love and sex. Elizabeth’s goal is to continue to publish stories that highlight women’s strengths in all areas of their lives and that serve as positive examples of what elevated love relationships and sex can do for everyone—even men. Moreover, as a diverse female, she feels passionate about bringing minority voices to the pages of contemporary Romance.

Flor throws herself into work the next week, trying her best to forget about that touch. She does what she can to keep Paco and his inviting eyes at arms’ length as well. What for? She chides herself. In case Collin accepts her invitation for coffee? Even she has to laugh at that. But what then?
It’s only ten weeks until she leaves for Smith. Ten weeks isn’t a lot of time, but when you’re young, it’s certainly long enough to try to get to know someone.
“Are you interested in coming over tonight?” Paco asks Flor as she helps him sort out semen samples in the lab.
She closes the door to the small fridge and smiles. “To watch a movie?”
He chuckles and removes his gloves. Leaning toward her he says, “I was thinking along the lines of wine and music. But if you prefer a movie . . . .”
Flor shakes her head.
“No to the movie?” Paco asks, running his hands through his thick hair.
Flor watches, mesmerized by his smooth manner.
“I don’t get it, Flor. One moment, I think you’d like to get to know me, then the next, you act like you don’t.” He steps toward her. She remains frozen, his gaze holding her in place, her eyes watching his gorgeous lips move.
What did he just say?
“Usually I can tell when a woman is attracted to me, but you, I get mixed signals.” He reaches out and runs a finger along the back of her hand.
Nope, not even a flicker of electricity. Flor looks down and doesn’t answer. But still she’s extremely attracted to him. Her panties are wet, and it’s a struggle to control her breathing.
The Argentinian draws his long finger up to her chin. “You are incredibly beautiful, Flor,” he whispers. His face inches closer to hers, his blue/gray eyes searching hers. He wants permission and a part of her is screaming to give it as much as it’s screaming for her to leave. She closes her eyes and parts her lips, knowing it won’t feel right. She wants him to realize it too.
Paco’s lips are as soft as she imagined them to be. He reaches his hand around her neck and pulls her body to him, his tongue entering and searching for more. It feels better than Flor even imagined when she lay awake touching herself, picturing him covering her body with his mouth and tongue.
All of a sudden she’s on fire. Flor reaches up, her hands on either side of his face. Their kiss deepens as his hands begin to roam, slowly unleashing the desire she’s felt since she first laid eyes on him.
The kiss feels incredible. He’s truly an expert at reading a woman. His tongue traces her lips before biting down softly on her bottom lip. The sensation travels straight down to her sex, pulsing with need. That’s what this is now. Pure, unadulterated need. He sparked it in her, and now he’s stoking the fire with every touch, every kiss.
As Paco’s lips travel down her neck, she catches their reflection in the window. The image of them together with her in his arms, makes her stop. She wrenches herself out of his embrace.
“I’ve got to go,” she whispers.
Before Paco has a chance to respond, she’s already out the door. When Flor nears the house, she stops and leans against a large magnolia tree, slides down the trunk, and hugs her knees to her chest. Flor tries to push the image of her and Paco out of her head. He’s not the one she wants. It’s Collin.
Why these men and why now? She laments. In the few short weeks she’s been here, she’s allowed herself to be consumed by longing for one and being pursued by another. Is this karma? Flor wonders. The moment she determines she doesn’t want to fall in love or become entangled in anything the universe puts not one, but two desirable men in her path. Although one doesn’t seem to want her back.
Flor stands slowly, watching bees flit from flower to flower on the low hanging branches. No one thing or person is worth the energy at this point, she resolves. She’ll do as she pleases and let the chips fall where they may.