You are here: Products Bloodhunter by Laken Cane 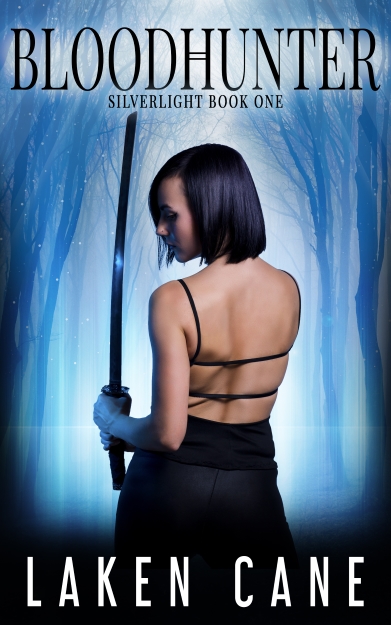 First he tried to kill her. Now, he’s obsessed with her…

Six years ago Trinity Sinclair was the victim of a brutal vampire attack. The assault changed her into something she has only recently begun to understand, and connects her in unimaginable ways to her attacker.

But the dominating vampire who attacked her doesn’t want to kill her. He wants to keep her alive.
Unfortunately, keeping Trinity alive won’t be easy when nearly every vampire in existence wants her dead.

As a Bloodhunter, she is one of the very few humans in the world who can give a vampire his true death–and there is nothing worse or more terrifying to a vampire than true death.

Luckily for Trinity, she doesn’t have to fight alone. She has a special sword and six protective people at her back– The vampire master who attacked her, a mysterious hunter, and four incredible–and hot–supernaturals.
And she is as passionately drawn to them as they are to her–emotionally and physically.

Her unquenchable thirst for blood is matched by a primal, undeniable lust, and Trinity realizes she is in more danger of losing her heart and soul than she ever was of losing her life.

The coffee addicted urban fantasy/paranormal and horror writer Laken Cane lives in Southern Ohio with her genius son, two Yorkies named Daphnis and Lexi, and one Golden named Chloe who rules them all.

I wrote the popular dark urban fantasy Rune Alexander series (you can find this series on Amazon), and the fans told me they wished Rune had been a reverse harem–they wanted to see her with all the men in her crew! So I decided to write a new series in which the heroin–Trinity–doesn't have to choose. She can have all her men, and her men will like it! 🙂

I was aware, vaguely, when my door crashed against the wall and someone sped into the room. I was aware, but I was too consumed by my need to care.
But when my unwelcome visitor grabbed me by the back of my neck and tore me from Clayton’s arms, I suddenly cared very, very much.
I landed on the floor almost hard enough to shake the overwhelming lust from my body, and Clayton and the intruder collided.
Angus.
Son of a bitch.
I stared up at them, a little more lucid, and then scooted back in a hurry when they began to fight. I was warped. I knew I was depraved, because the sounds of grunts and pain and hard fists slamming against flesh, of bones crunching and furniture breaking…it was like music, beautiful and exciting, and the sharp, acrid scent of blood mixing with the unmistakable scent of sex made me want to lie back, open my legs, and beg both men to end my suffering.
But then I caught a quick movement from my peripheral vision and glanced toward the doorway, and I saw Mrs. Watson peering around the doorframe, her eyes wide and a broom in her white-knuckled grip.
“Oh, shit,” I whispered.
And even as she darted a quick look my way and then disappeared—to call the police again, I had no doubt—I knew Clayton was right.
I was most definitely going to have to move.
And I was going to need a sturdier door.
*Excerpt from Bloodhunter, book one in the Silverlight series

Be the first to review “Bloodhunter by Laken Cane” Cancel reply