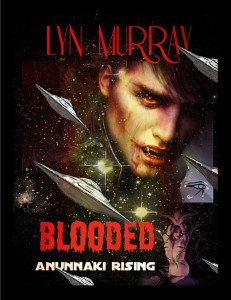 If you thought Vampire Myths were fully discussed, written and screen played into movies, and there is nothing further to be said or discovered – you are very wrong.

This fictional allegory will shake your understanding of how the world works, and teach you how immortal beings have raised, shaped and manipulated our existence.

With an exciting introduction, we are teased with incredible possibilities and crazing theories, as the author has us standing on edge with each turn of the page, waiting for the action to unfold. Forget the average vampire book you find on every corner – this is not a book for teens. Blooded (anunnaki rising) based on years of research, is set in a modern world so terrifyingly real, the reader gets chills when considering the possibilities, which are reinforced with fact based addendums that are hard to deny, in this masterpiece filled with “in your face” Vampiric Fallen Angels – the first in the series. The writing is whimsical, the dialogues are refreshing – the reviews are astounding! Yu will experience terror at a completely new level.The combination between vampires and ancient mythology makes this novel much more seductive, and raises the bar for all that follow!The Blooded Saga deals with the awakening of an Anunnaki King – a nearly immortal Overlord – who thinks of himself as ‘the God’ of mankind, because he and his came to Earth eons ago and genetically engineered the indigenous life they found here. In a bid for power, he sets out to destroy humankind in an attempt to summon ‘the One True God of ALL Creation’ for a showdown. Blooded – Nomads (whose publicity “tease” is available now on Amazon) hurls Earth into chaos, and the onset of Biblical tribulation begins. Blooded – Cinder (the third and final novel in the Blooded saga) finds tribulation over – it’s Hell on Earth, and the showdown between the “pretenders to the throne” and the real deal Is On!Writing this saga has been an exciting journey for me. Like Star Trek’s Enterprise and her crew – it has taken me into the unknown and uncharted, that was – at times, frightening. At times (most of the time) the books literally wrote themselves. Where they came from, I can’t say – but they’re wonderful, and I’m proud to have been the vessel used to bring them to you.