You are here: Products Blood Red: The Complete First Season by Vivian Wolkoff 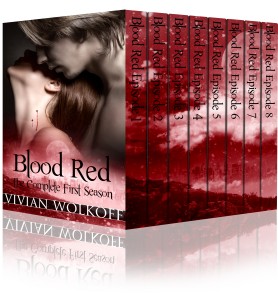 This Complete First Season includes ALL EIGHT EPISODES in the Blood Red –Season 01! Save over 60% over buying the single episodes!

Evie Williams lives a boring life – and she likes it that way. Her world is very black and white. Routine is good. Excitement is bad. She’s happy to play by her self-imposed rules. After all, they help her keep her abusive, stalker ex-boyfriend at bay. Or so she believes…

But there’s more to the world than Evie could possibly imagine. Elves, vampires, witches and pro-Humanity terrorists are very real – and she can sense the danger they pose to her and others. Worst of all, they just realized how precious Evie’s gift is.

As the world Evie never imagined possible closes in on her, Chris, the vampire in charge of studying Evie, is getting more and more interested in her… and it has nothing to do with his loyalty to his vampire father.

Blood Red: The Complete First Season is a story of unlikely heroes, damsels who refuse to be in distress and political conflicts solved by fights to the death.

Vivian Wolkoff has always been in love with words – even before she could read them. So, it should be no surprise she turned to writing and reading very early in life. She first self-published a poetry book at the age of 13, followed by two honorary mentions in contests promoted by a small publishing house in her native Rio de Janeiro, Brazil. Then, she decided to do some living and find out what else she loved. After college and moving cross-continent twice, Vivian decided to turn to self-publishing again. She is the author of Showmance, the first book in a trilogy about a fake celebrity couple and their crazy fans, and the psychological thriller Love You To Death. Blood Red is the first novel in her Preternatural Chronicles – a shared universe filled with unlikely heroes, damsels who refuse to be in distress, intrigue and epic adventures.

From that moment on, I couldn’t write Blood Red: The Complete First Season fast enough!

Chris frowned. Evie had just run outside. She looked around, spinning on her heels slowly several times. Then, she froze.
She was just standing there, in the middle of the street. Her eyes drifted to the café. Their eyes were locked.
Chris’ eyes drifted down the street. The old pickup truck was rushing to Evie, skittering on the icy street. It looked like the driver had lost control. Evie looked terrified, her eyes wide and her face pale. Her shoulders shrank, bracing for impact. It only made her look small and fragile.
For a moment, Chris saw what would happen next. The car would hit her head on, the impact sending her flying several feet away. Her body would hit the cold pavement. Her blood would fall around her, painting the snow in shades of red and pink. The fire that burned in her eyes would disappear and her smell would fade into nothing. At that idea, Chris felt something inside him snap. He couldn’t let that happen.
Chris acted before he really thought about it.
He sped out of the café, his feet barely touching the frozen ground long enough to slide on the snow and ice. The headlights of the car hit his eyes, but it wasn’t enough to blind him. He saw Evie squint under the lights, her eyes scrunching shut. The big, old pickup truck sped towards them, unyielding and aimless. Its wheels were useless on the ice. A nice looking old man with tons of wrinkles on his narrow face and wide, scared eyes was behind the wheel, trying to reign in his beast of a car.
Chris reached Evie. He had seconds to save her life. His arm circled her waist and he pulled her close. He twisted his body out of the car’s path, taking Evie with him. He used his body to shield her, wrapping himself around her like an ivy. The pickup truck rushed past Chris, a wall of cold air hitting his back as the pickup truck passed them by. It probably had missed him by a hair.
For a few precious seconds there was nothing but the feel of her. Her smell around him, like warm caramel bathing his skin, and her breathing tickling his skin.
It took Evie a second to realize Chris was next to her. Her lips parted in surprise. He pulled her close, flurry drifting around them. Her skin was covered in deep shivers. Chris growled when he realized she was wearing nothing but her uniform. In the chaos of the moment, her eyes seemed to take forever to find his face.
She gasped.

Be the first to review “Blood Red: The Complete First Season by Vivian Wolkoff” Cancel reply