You are here: Products Blood Magic by Anna T Holloway 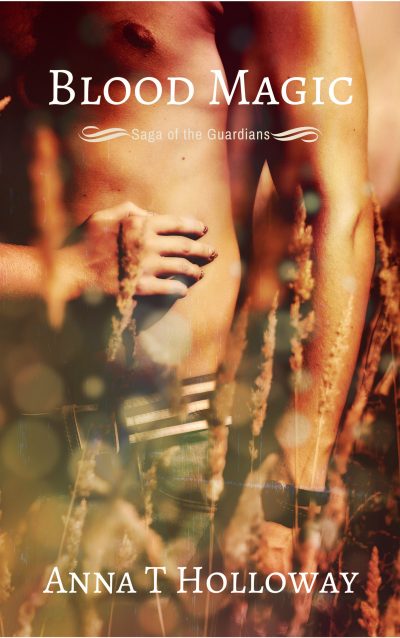 Mitch may make the women swoon in his leather cut. But when he’s prowling the forest, as a panther, God help his enemy. The second he’s on the trail of a demon, he nearly pounces Eva, a witch, who’s being hunted by the creature. Together, they will face their nightmares. As bonds form and a power blooms between them, they will risk it all for the other

Anna T Holloway is a wife and mother of two teen sons. She loves spending time with her family in the outdoors as much as possible. Each of her books is a reflection of a place she visited with her family. She has always believed in things you can't see and believes faeries do exist in the forest around her home.

I was only planning on writing the first book, Shadow Wings, and leaving it with only one book. When I started getting emails asking about the other characters, I decided to bring back one of the Brothers N Blood so he could get something he always wanted.

The darkness engulfed the forest. A faint smell of burnt wood from someone’s campfire drifted across the breeze. Crickets called out in a soothing song.
Orion stood stone still as he narrowed his blue gaze at the darkened figures who tossed and turned in their sleeping bags. Each one had no clue of the danger that lurked outside their tents.
Humans, he thought as he took a relaxed breath and leaned against the tree. Why were they always blind to the true animals? His lips twitched at the thought.
As he watched the few dozen occupants dim their lights, he wondered if they would be enough. Would the dozen witches be an adequate amount to grow his power so he could stand before Hell and rule the dynasty? Would he need more?
Orion stepped forward. Heel to toe, he advanced. His boots lightly touched the earth as if he floated toward the camp. The air barely moved as he picked up his pace. Closer, he drew. His heart thundered in his ribcage. The excitement of drawing blood, feasting on their souls rushed him forward.
He paused outside the first tent. An owl in the distance hooted. He momentarily glanced in the direction expecting to see it sitting in a distant tree then he hunkered down. Extending his pointer finger, he sliced through the material with his long razor sharp nail, as if it were butter. The smell of coppery sweetness filled his nose. As the blood pumped through their veins, it radiated a scent around them—a cloud of saccharine visible to only the ones who craved the red liquid.
He usually savored the moment when he took someone’s life, yet this day, he could not. He had a purpose. The sooner he collected as many souls as he could, the better. Time was ticking and he couldn’t waste one second.
He hovered above the duo. In one swift motion, he ripped the two women’s throats as they slept in their tent. It was more human then he liked.
Without tasting the blood that dripped from his fingers, he moved on to the next tent, then to the next. Each one a hurried gesture so he would collect their souls, to add to his united power.
Eagerly, he moved to the last tent. He was ready to listen to his victims’ screams. He needed to watch the fear build in their eyes and the life fade into darkness.
The last will be the best, he thought. I will savor every second of her.
He sliced the tent open and slipped into the shadows. The women lay in their sleeping bags with no clue of the horror that unfolded around them. They slept peacefully as their friends were ripped from this world.
Orion reached out, his fingers flexed as they neared the woman’s throat. He struck as if his right hand was a snake, ripping into flesh. Blood seeped out around his digits as the woman choked on her own blood. Orion smiled then turned his attention to the one on the left.
Eyes a moss green stared up at him. Seeing the woman awake, unafraid, startled him. He cocked his head to the side as he extended his one finger toward her throat. Still, she did not waver. As his nail sliced into her ivory skin, revealing a tiny trickle of blood, she did not move.
Her eyes filled with tears but she stared at him. As if she read his soul.
If I had one, he thought.
“Scream for me,” he spoke in a soft but growling tone.
“Never.”
He sliced deeper. “Now?”
“Never.”
He frowned as he watched the blood drip from the wound.
“Why not?” He had never asked the question to one of his victims before. He had not cared.
She smiled slightly. “Death is my door into the future.”
He had never heard such nonsense. “Die and I will keep you with me forever.”
Her eyes looked up, above him.
Orion turned his gaze in the same direction. Two dolls made of twigs hung from the center of the tent.
“Your craft will not help you,” he said as he leaned down breathing the same air as her.
“It will keep you from taking our souls.”
He growled as he ripped the dolls free and threw them into the side of the tent.
“We were expecting you,” she whispered through drowsiness.
He grabbed her, shook her until she opened her eyes. “What did you do?” he more or less screamed.
“Our souls are safe…”
“How?”
“You’ll never…”
When she did not finish, he screamed, “They are mine.” Without a thought, he ripped her head from her shoulders.
His breath came and went hard. As his rage grew, so did his grip on the hair of the head he held. He raised the head up to look at it. What a waste…He sat back and stared at the woman’s dead eyes.
A phone buzzed.
He lifted the cover to see where it was hiding. Pulling it from under the woman, he read the text.
Why are you there without me?
Orion smiled. There’s another…