You are here: Products Blood Hunger by Beck Robertson 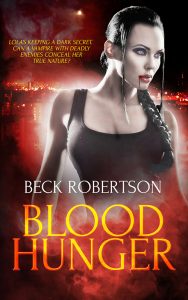 Can a vampire with deadly enemies conceal her nature from her mortal lover when the pair are framed for a murder they didn’t commit?

Raven-haired femme fatale Lola Devereaux is used to wrapping men around her finger, but when handsome Dillon Chambers walks into her life, passion sizzles between them. To her surprise, she finds she’s the one who yearns to submit this time.

But Lola’s keeping a dark secret – she’s a vampire, and if Dillon finds out, he might reject her forever, just like her mortal ex did.

Keeping a secret this big is hard enough, but when the need to feed causes Lola to make a serious lapse in judgment, an old enemy takes the opportunity to wreak revenge, putting Dillon in the frame for murder. Lola has to find a way to clear his name or risk never feeling his strong arms around her again.

Does one stupid error have to mean kissing goodbye to the only guy who makes her heart race? And is telling the truth really so incompatible with true love?

I live with my partner, have an avid interest in Tudor and medieval history, as well as a probably unhealthy addiction to fantasy novels and The Legend Of Zelda series of games. I’m also a huge fan of George.R.R Martin’s Game of Thrones books and the HBO TV series, and I absolutely adore The Vampire Diaries TV series and books too.

I was inspired to write the book as Lola’s feelings for Dillon and the way she tries to push him away had me rooting for him to break down all her walls and show her she’s not going to be rejected.