You are here: Products Blissful Encounters by Dimitria DesJardins 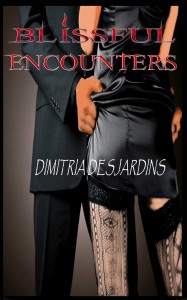 Mia here. So I’m a single woman. I supported my boyfriend as he realized all of his career dreams. I postponed most of my career dreams in hopes of having children and being a stay-at-home mom someday, which, of course, never happened. After years of betrayal, frustration, and sexual disappointment, I found out that this joker was cheating on me across the country! I left his ass, but that was not easy for me. I always put our relationship and home first. Now this is the first time that I’m putting myself before Ken and his stupid needs. I’m devastated by the decision, but deep down; I know it was only a matter of time.

So I’ve saved a lot of money over the years, and I decided to kick things into high gear. I’m going to travel abroad– something I have yet to do, despite traveling all around the U.S. I’m gonna go to beautiful Europe and use my foreign language skills for once. I’m going to visit some of the most romantic places, meet some really cool people, and have the most explosive sex of my life. Hey – a girl can dream!

I wrote all about my trip in my journal, and now I’m letting you read it! Follow me through some old, historic cities and new, unforgettable adventures. Journey with me as I rediscover myself and pursue the things that are important to me. Try to keep up with me during my hot European summer. See if you can handle my Blissful Encounters!

I’m a writer with a flair for passion and as you will see that passion flows from through the pen to the paper giving you one hell of a ride on these Blissful Encounters.

My travels overseas and many of the encounters I’ve had inspired me to write this hot and steamy book that allowed me to release built up tension and frustration.

Quickly, she came off his face and demanded that he got on top of her. He complied. Her wet spot was so silky wet. He had a little trouble finding her silkiness but accidentally entered her asshole. Claudia informed him, “That’s the wrong one!” Since he was not experienced, he had no idea what she was talking about. He continued. She relaxed and took it. He fucked slowly and savored every moment. He did not want to cum quickly like he did earlier. He wanted to enjoy this as long as he could. Unaware of where his dick really was, he was in heaven and Claudia was also enjoying this backdoor lovemaking. After a long time of action, Floyd came inside her. He had no idea that he should pull out. It is not until he actually did pull out that Claudia told him, “You know you just fucked me in my ass, don’t you?” Floyd was stunned. He had no idea that he actually was inside her asshole. It was so wet and juicy that it slipped right into her ass. He apologized to her, but was thrilled with how good the sex felt. He was hooked! His first sexual experience was anal and therefore, that remains his preference. After he explained this to me, it is understandable. He tells me that he enjoys pussy very much, but that the ass is truly his preferred fun.
I appreciate how Floyd has opened up to me in such a short period of time. He is really a likeable guy and I hope that we will stay in touch. It would be nice if could visit me. Money doesn’t seem to be an issue. He is well-traveled, has the money to travel, and has been to a few US cities already.
After breakfast, he has a surprise for me. He tells me that he got us tickets to Germany. With the speed trains in Europe, it is only a few hours away. I am very excited and impressed with his surprise. We arrive at the station and travel to Heidelberg. It is a beautiful city. German sounds similar to Dutch – both are very guttural languages. They are not pretty at all. Heidelberg is beautiful. It is clean, safe and very scenic. There are rivers, mountains and lots of great ethnic restaurants. Heidelberg is a college town. There are a lot of American students attending university there. Despite all of the younger people living in this beautiful town, it is very quiet. Most people travel via bicycles on the old, cobblestoned streets.