You are here: Products Blessed by Maggie Blackbird 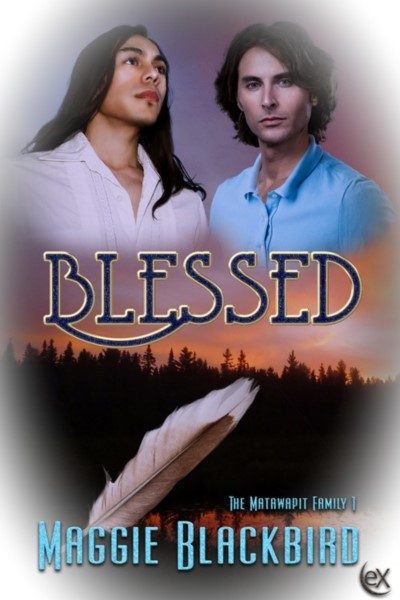 A mixed-blood Catholic seminarian struggles to discern his true calling: the priesthood or his ex-lover, a proud but damaged Ojibway man.

It’s been ten years since Emery Matawapit sinned, having succumbed to temptation for the one thing in his life that felt right, another man. In six months he’ll make a life-changing decision that will bar him from sexual relationships for the rest of his life.

Darryl Keejik has a decade-long chip on his shoulder, and he holds Emery’s father, the church deacon, responsible for what he’s suffered: the loss of his family and a chance at true love with Emery. No longer a powerless kid, Darryl has influence within the community—maybe more than the deacon, and he intends on using his new-found power to destroy Deacon Matawapit and the church.

Hoping to save the church, Emery races home. But stopping Darryl is harder than expected when their sizzling chemistry threatens to consume Emery. Now he is faced with the toughest decision of his life: please his devout parents and fulfill his call to the priesthood, or remain true to his heart and marry the man created for him.

An Ojibway from Northwestern Ontario, Maggie resides in the country with her husband and their fur babies, two beautiful Alaskan Malamutes. When she’s not writing, she can be found pulling weeds in the flower beds, mowing the huge lawn, walking the Mals deep in the bush, teeing up a ball at the golf course, fishing in the boat for walleye, or sitting on the deck at her sister’s house, making more wonderful memories with the people she loves most.

I love to write about real-life issues and real life on the rez.

The putter of a diesel engine carried to where they stood at the side of the house.

“Sounds like the priest’s clunker.” Clayton puffed on the cigarette.

Knots formed in Darryl’s stomach. Did Emery accompany Father Bennie? What the heck was the priest doing up at Long River? Darryl lived at the reserve’s most northern district, far from Grassy, where the Matawapits resided.

Don’t watch them go by.

The car slowed and then turned into the driveway. Black, wavy hair appeared in the windshield. Hot tingles shot through Darryl’s arms and legs. He’d better get himself under control. Running into the coward was expected. It was the reason why he’d raced around the reserve like a fool earlier, trying to figure out what to say when they eventually crossed paths.

Had Emery come to apologize? Maybe reconnect? Wait a second. Someone had probably sent him. In the past, he hadn’t possessed the testicular fortitude to initiate anything. Father Bennie and Deacon Matawapit were up to something.

“Is that Emery?” Clayton frowned.

“Yeah. Gimme a second.” Darryl marched around the side of the house. When the car door opened, he froze.

“Hello. I was hoping to catch you at home.” Emery doffed his sunglasses, exposing his thick black lashes and bright green eyes. He tapped his shades against firm thighs Darryl had caressed during the best time of his life.

Although Emery’s voice was deeper, the feathery tone still stroked Darryl deep inside his jeans. Quivering, he spat out a, “Hel—hi…” He cleared his throat of the damned frog making him sound like an idiot. “Hello.”

“I-I planned on stopping by sooner.” Emery’s gaze roamed in every direction. “I was busy… unpacking”

Darryl motioned to the side of the house. “I was heading out for a drive once I finish talking to someone.”

“Oh…” Emery’s gaze settled on Clayton, who appeared around the corner. “I’ll come back another day when you’re not busy.” Disappointment lined his voice. “Have a good night.”

When Emery turned for the car, Darryl’s frozen heart churned into overdrive. The question jumped from his mouth. “Where’re you going?”

Emery pivoted. “Back to the rectory. It’s where I’m staying during my visit.”

Darryl stifled his groan. Call him a sucker for asking. “You came here for a reason. Why?”

A shiver careened along Darryl’s spine. Instead of being prodded, Emery, of all people, had initiated something.

Everyone knew how tight Emery and Darryl had once been. The cunning coyote had better not think of Darryl as a traitor who’d lose focus on the Traditionalists Society’s mandate now that Emery was back. “We can finish our convo tomorrow. Stop by my office in the morning.”

“Never mind. I’m outta here.” Clayton stamped to his pick-up parked on the side of the road. He glowered at Emery, who returned the frown with a nod.

Fire crackled through Darryl’s veins. Hostility and rudeness to another wasn’t the purpose of the Traditionalists Society.

“We can meet at the Treaty Grounds.” Darryl used an even tone, though his pulse points raced faster than a bear chasing down dinner. “Right now my road’s pretty much the Trans Canada.”

A truck pulling a skiff rambled by.

“Everyone’s heading out for the evening fish.”

“Okay.” Emery’s mouth remained closed while his full lips moved upward. He had the same shy smile capable of melting Darryl’s limbs. “I’ll meet you there.”

“Sure.” Darryl slid on the four-wheeler.

Emery opened the car door and got in. He drove off and left a trail of dust in his wake.

Darryl turned the key. The machine’s engine roared to life. This couldn’t be happening. Someone must have plopped him in the middle of a dream. Who was the courageous man who’d come of his own accord?

He steered the four-wheeler down the driveway. People changed. Before entering St. Michael’s Seminary, Emery had lived in Thunder Bay to attend university. Being out from under his father’s thumb had probably given his confidence a much-needed boost.

His dad’s here and he sought me out.

Had Emery told Father Bennie his intentions for the evening? Where would their talk lead to? There was only one way to find out—drive faster to the Treaty Grounds.

Be the first to review “Blessed by Maggie Blackbird” Cancel reply