You are here: Products Blanks & Blues: My story isn’t over yet by Misbah Khan 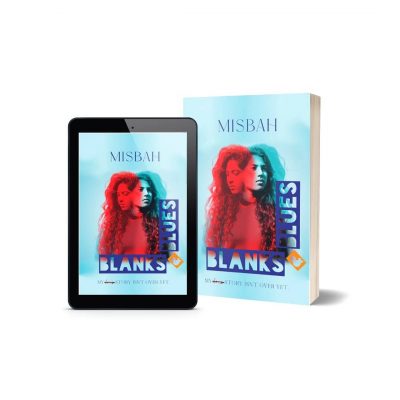 Blanks & Blues: My story isn’t over yet by Misbah Khan

The Blanks & Blues is a coming of age story. But it’s not just a story for youngsters. Noor, the only child of her parents, experiences life-changing events during her childhood. Circumstances beyond her control. Searching for answers, she finds her catharsis in storytelling in verse. Looking for answers to her devastated life, she eventually finds the courage that would help her define her destiny.
The story moves between Nainital and Delhi, and eventually to Canada, in an interesting non-linear narrative. The novel explores gender dynamics, orthodoxy, homophobia, plagiarism and other contemporary subjects viewed and understood from a young female character’s perspective.

Misbah is a carefree and happy-go-lucky person, but also an over thinker known for her interest in blackout poetry. She is a literature graduate from the University of Delhi and is currently pursuing a Masters in Social work from the School of Social Work, Indore. She writes prose in English and poetry in the Hindustani language. She writes louder than she can ever shout and is crazy about sunsets and starry skies.

I have been an avid reader since I was young. Reading encouraged me to reflect and question. I wanted my favourite characters to not die, I used to reimagine fictional plots. This urge to reimagine and imagine helped me to start writing a story the way I had wanted to tell. I started my novel not with the mere motive of knitting a fiction, but to put forth new questions. My writing is born from the urge to explore the meanings beyond lines.
I started with my novel when I was sixteen and couldn’t finish it until I was 20. Studying literature in undergrad made me unlearn so many notions and taught me so much that I had to rewrite the whole manuscript. When I started with the novel, I did not have any formal knowledge in creative writing. I learnt through hit and trial methods. YouTube videos and blogs covering all the ‘how-to’ topics related to fiction writing helped me to give it a desirable form.

"But Raag, some exceptions are always there," said Noor while chatting
to him. They both were wandering here and there, scrounging for their seats in the business class on an aeroplane while embarking for Canada. She was excited for their journey as she was going to fly above the clouds for the very first time. First time on an aeroplane, first time with Raag. It was March, the month of early spring in Delhi. After so long they were glad to feel the warmth of the sun. Once again, the birds and the flowers seemed energetic and white puffy clouds lingered above their heads.
Raag finally found their seats and squealed with delight, “Hey Noor! I found it, I won and you lost, dear."
"Stop behaving so childishly, Raag," commanded Noor in an embarrassed tone, as she caught a boy of around 16-17 years old sitting in the adjacent row to them, eavesdropping on their conversation and smirking. “He must be thinking that we are fools. Look he is making fun of us.”
“At least,” said Raag, “We made somebody smile today.”
Both of them were doing their favourite activity, that is debating on some arbitrary stuff. Meanwhile, someone caressed Raag’s back and said, “Hello, Raag”
Raag whirled around and saw a familiar face. He was nearly six feet tall blond boy. He appeared to be roughly in his early twenties. He was a handsome man with a clear jawline, sloped nose, large blue eyes, properly arched full lips and noticeable dimples. Raag tried his best to retrieve his memory. The familiar face raised eyebrows, his interrogating eyes and the tilted head tried to find out if Raag remembered him, by any chance. Within a blink of an eye, Raag got immersed into a pool of nostalgia, the galaxy of memories protruded in front of his optics. Memories of their gatherings, exchange of Diwali gifts, euphoric trips and dozens of flashbacks of their childhood. His eyes widened with surprise and glee.

Raag held out his arms to embrace him and shouted, “Aaron… I can’t believe I’m seeing you again.”
"Let us settle down and talk. It's been a long time since I last saw you." said Aaron.
Aaron requested the elderly man sitting next to Raag to switch seats with him. The co-passenger was an African, and seemed to be in his late sixties with a big pot-belly and grey hair. He agreed without many requests. After exchanging a few words of thanks, they all settled.
“What brings you here, my friend?” inquired Raag.
“I am heading to Canada to attend a seminar and some other intermittent workshops on cinematography.” Aaron replied with the same zest in his voice, which he had had when they were kids.
“I am so delighted for you, Raag. I’ve witnessed your passion for music since childhood. You truly deserve this success.” complimented Aaron, his eyes shimmered with the thought of his friend’s success.
“Thanks a million, buddy.”
When the airplane was high amidst the white spring clouds, Noor peeped out of the window with eyes full of excitement and admiration. Just the slightest glance of the beauty and boom, sound muted, off to the utopian world of her imagination, thoughts started pouring-in like a drizzle. Clouds scattered all over the sky, as numerous as the troubles in one’s life, behaving like a border, splitting up the melancholy and the answers, she mused. We Just need to build a gap so wide with our smiles, to forbid their union. Poetry resembles these clouds; it dwells somewhere in between the melancholy and the answers. She smiled peacefully and whispered to herself, gazing at the floating clouds out of the window.
Suddenly Aaron’s gaze turned to Noor, who was sitting beside Raag. He was taken aback to come across her for the first time in forever. Her brown eyes looked like hot chocolate. She had perfectly curved eyebrows and dense black eyelashes. Her long black hair was dangling down her waist. She was looking elegant in the white ruffled top with the blue denim jeans. Hesitating for a moment, Aaron threw her a cabalistic grin, hopped…

Be the first to review “Blanks & Blues: My story isn’t over yet by Misbah Khan” Cancel reply