You are here: Products Blackmailed Bride by Chris H. Stevenson 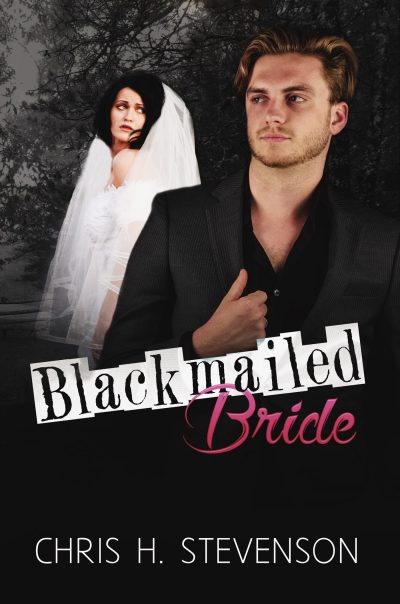 Ryan can’t wait to get rid of Candace fast enough because he’s currently separated from his wife, Gloria, and attending marriage counseling. Gloria left Ryan to move in with her parents after suspecting he committed adultery. She also believes he enjoyed a tawdry sex act with a floozy at his high school reunion. Besides that, she can’t stand the smell of his oil paints, alcohol and linseed oil. Yet Ryan and Gloria are a hair’s breath away from reconciliation.

Candace, rightfully fearing for her life, will do anything to draw Ryan’s favor to her; including stripping for a portrait, spiking his food with aphrodisiacs, performing risqué dance routines, openly flashing him and trying to sleep in his bed. Ryan, with his Christian upbringing, is forced to use desperate measures to fight off her provocative advances. His arsenal includes a savage masturbation episode, shows of temper tantrums and prayers. Strippers and pole dancers are worthless trash, he keeps telling himself. His mother had taught him that even though he’d visited some clubs in his younger days. Yet this petite little gal begins to soften his heart and show him another side of life that he never knew existed.

Gloria discovers Candace in her home with Ryan and storms off, threatening to sue him for everything he has.

Antonio has put his entire Mob Squad on the hunt for his runaway bride because she saw him commit a murder and he needs to silence her. Antonio closes in on her location, forcing Ryan and Candace to pack their survival bags and run to a hideout in the bluffs for six days. During this time Ryan finds out that he is smitten and hopelessly in love with Candace and vows to protect her at all costs. Bouts of intense passionate lovemaking seals their pact and they fall more deeply in love with each other.

With the help of friends, Ryan and Candace escape on a shrimp trawler and are accosted by Antonio Madera on the high seas. A donnybrook fight ensues. Ryan and his friends are victorious, but the love of his life is shot through the chest during the end moments of the fight. He has no idea whether she will live or die, and he’ll do anything to be with her until the critical outcome.

Antonio and his Madera Mob Squad are captured and prosecuted to the fullest extent of the law by testimony and evidence provided by Candace during her hospital stay in ICU. Lengthy jail sentences are administered to the persons responsible for the murder.

Candace Sabella, teetering between life and death, survives and joins Ryan in his three-story Victorian home. Gloria, feeling sorry for Candace’s near fatal injury, serves Ryan with a no-fault divorce instead of a full-blown divorce suit.

The couple sails to the Bahamas for a grand wedding, attended by friends, families and bridesmaids consisting of rowdy strippers. Nine months later, Mr. and Mrs. Barlow welcome a new addition to their family, a daughter who is christened Cynthia Joan Barlow.

Chris Stevenson, originally born in California, moved to Sylvania, Alabama in 2009. His occupations have included newspaper editor/reporter, front-line mechanic and federal police officer. He has been writing off and on for 36 years, having officially published books beginning in 1988. Today he writes science fiction, fantasy, paranormal romance, young adult, thrillers and horror. He has a total of 10 titles appearing on Amazon. He was a finalist in the L. Ron. Hubbard Writers of the Future contest, and just recently took the first place grand prize in a YA novel writing contest for The Girl They Sold to the Moon. He writes the popular blog, Guerrilla Warfare for Writers (special weapons and tactics), hoping to inform and educate writers all over the world about the high points and pitfalls of publishing.

It was rather a triple dog-dare-me challenge to finally write a romance novel after 28 years in the business. I researched, read and got help from a pixel princess. I'd written sweet romantic elements in all of my published books, but had never attempted this genre. I found I love it, and convinced other men that it was a worthy category to read and explore.

He strolled toward his favorite oak tree, the one that had the largest
trunk and thickest boughs. He could stand in the cooling shade, the
canopy overhead wiping out all but a few slivers of sunlight. He arrived at
his usual spot next to the trunk, pulled out his pack and lit up one. He
looked down and noticed a pile of dirty butts he had dropped in the past,
too close to the tree to be chopped up by the church’s huge riding mower.
Ryan brought his eyes around to the church between the trees. The
parking lot was filled with expensive late-model cars and SUVs. There was
no service on Saturday. But there was definitely an activity going on.
Something hit his shoulder. Dust specks fell in front of his eyes. Now
8
there was a tap on his head. A piece of bark hit the grass. He looked up
expecting to see a squirrel, but then furrowed his brows and stepped
backward.
A female crouched on a thick branch ten feet up from the ground. She
was wearing a fluffy bridal dress. A long bridal train was tied in a knot
around her neck. Her face looked elfish, framed by short, black, pixie-cut
hair that sported purple ribbons.
Ryan flicked his cigarette away. “What in the fuc…damnation are you
doing up there?”
“You’ve got to help me,” the bride said, nearly losing her balance, and
sending down a shower of bark bits and wood dust.
“Climb down out of there. Are you trying to kill yourself?” He looked
around, expecting to see someone catching him talking to a bride in
a tree.
“I can’t get down,” she said, “It’s too hard with all this on. Help me.”
“How’d you get up there?”
“I climbed—shimmied.”
“Then climb-shimmy back down.” He couldn’t believe he was having
this conversation. He wondered if he was the target of some hidden
camera.
“Do you have car?” she asked as she looked through the tree limbs.
“Yeah, what about it?”
“Okay, good. You’ve got to get me off the property.”
The bride turned, dropped her train, and hugged the trunk. She
bowed her legs; her heels pressed into the bark. She began a slow duck
walk down.
Ryan had the good grace to avert his eyes—his vision offered a straight
shot up her wedding dress. He glanced up, giving in to the curious
spectacle. Of all things, she wore a racy purple thong.
Ryan heard an “Ohhh!” and saw her falling backward. He threw his
arms up, fashioning a cradle. He braced his legs for the impact. When he
caught her, it was like a small child had alighted in his arms. He caught a
glimpse of her and saw a beautiful face that was screwed up and flushed
pink. She looked very young, which made him feel like a pervert for
checking her out. She kicked and wiggled out of his arms, pulled her train
up and ran for his car.

Be the first to review “Blackmailed Bride by Chris H. Stevenson” Cancel reply