You are here: Products Blackjack & Moonlight: A Contemporary Romance by Magdalen Braden 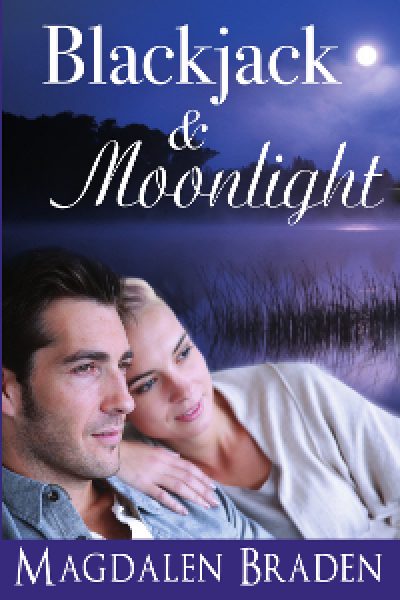 Sex v. Love–a battle in the courtroom and the bedroom!

Hotshot litigator Elise Carroll doesn’t have time for romance–she wants to make partner at her Philadelphia law firm. Despite her mother’s urging, Elise avoids settling down by keeping her relationships short and sexy. Her idea of a perfect date? Beer and pretzels at a Phillies game.

When Jack “Blackjack” McIntyre–Philly’s super-sexy new judge–falls for Elise in court, she’s horrified. He “claims” to be in love with her–but that can’t possibly be true. He doesn’t give up trying to wine and dine her, though, so she devises a new scheme. Like all men, surely he’ll leave after a short and sexy fling.

Only problem–Blackjack refuses to sleep with her! They compromise–she’ll go on his romantic dates if he’ll alternate them with her “just sex” dates. Their contract works surprisingly well–until Elise can no longer find the line between love and sex.

Can Elise get her life back where she wants it–in a partner’s office? Or will Jack McIntyre use his superpowers to win their contest of wits?

When not writing, she enjoys spending time with her crossword-loving husband, their Rhody-mix dog, and two omnipresent cats in the Endless Mountains of Northeast Pennsylvania.

All I had to do then was write the book. Easy!

“I made a reservation for seven-thirty,” Jack said carefully. He was standing in the doorway of the living room, ready to head right out. He held his wrist like he wanted to refer to his watch but was too polite.
Elise grinned at him and pointed. “The phone’s over there. You can cancel the reservation.”
His frown tightened. “You’re not feeling well?”
“On the contrary, I feel great.” She walked over to him, placing her hands on his coat lapels. “Are you sure you won’t take off this coat?”
“No. I mean, yes. I’m sure.” He stepped back a few inches. He looked stern and unwavering—a bit like he had when he’d been prosecuting Philly’s mob boss Dino “T-Rex” Reggiano. No sense of humor, clearly. Either that, or he was about to find her in contempt of court.
“Jack,” she soothed. “I can feed you if you’re hungry. Gusto’s delivers. It’s pretty good pizza.”
The offer seemed to startle him, which warmed her cynical heart no end. She watched as he considered his options.
“I would prefer to take you out to dinner. If you’ll uh, put on some clothes,” he said, studiously not noticing her breasts, which felt very perky under the thin silk of her robe. “I’ll have Gino put back our reservation at La Famiglia.”
“I don’t need to be wined and dined. I’m happy to skip straight to dessert. And by ‘dessert,’ of course, I mean sex.”
Elise drew her hand down the gray flannel sleeve closest to her. She let her fingertips skate along his hand, which he twitched away and hid behind his back. She glanced at his face. He looked stony enough for Mount Rushmore. She hadn’t thought Jack could get more austere—he appeared almost apoplectic with frustration. He clearly hadn’t gotten laid in a while.
This was going to be fun.
“That’s not why I’m here,” he insisted. He stopped trying to limit his gaze to her face. Now he was staring over her right shoulder.
“Well, that’s why I invited you. For sex.”
“I want to date you, not sleep with you.” He said it as though he were stating the obvious to a dim-witted defendant.
So crusty and serious. Elise couldn’t resist teasing him. “Really? You don’t want to sleep with me? Not even a little?”
That got his attention. He narrowed his eyes as he met her look. “Ah, the litigator’s trick. Won’t work. Of course I will want to sleep with you. But tonight, no. What I want tonight is to take you out to dinner.”
“Funny,” Elise said, reaching down to brush her fingertips over his groin. “I could have sworn you were interested in having sex sooner rather than later—”
He took another half step back and glared at her. “Still won’t work. That’s a physiological reaction. It doesn’t change my stated intention to take you to dinner. You said you would come on a date with me.”
“Assuming facts not entered into evidence, Your Honor,” she objected. “All I said was okay. No one bothered to ask what I was saying okay to, and as there wasn’t an explicit offer on the table, you can’t read terms into my acceptance.”
“Elise,” he growled.
“Judge,” she growled back at him.
He really was going to throw a blood clot, she thought, as his face contorted with frustration. It got almost—but not quite—ugly. She didn’t think anything could make him look ugly. Damn him. And why didn’t he want to skip straight to the sex? If she made herself any more available, she’d be draped over the couch wearing nothing but a shiny red ribbon.
Suddenly his face cleared. His shoulders dropped a full inch and he even managed a slight smile. He folded his arms and leaned back.
“Fair enough. You’re absolutely right. We didn’t spend enough time yesterday negotiating terms. By all means let’s do that now.”
“I don’t want to negotiate terms. I want to take you upstairs, unwrap you like a Christmas present, and get sweaty with you in my bed.”
“I understand that, Elise.” He made her name sound like a Gypsy curse. “I am declining that generous offer. My counteroffer of dinner at a five-star restaurant is clearly unacceptable to you. So let’s try to find some middle ground.”

Be the first to review “Blackjack & Moonlight: A Contemporary Romance by Magdalen Braden” Cancel reply