You are here: Products Black & White by Erol Rashit 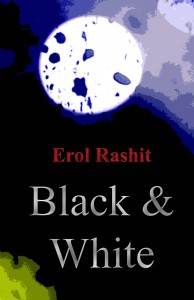 A young man, Igor, adopts as his mother a middle aged woman, Sylvia, after meeting her in a café, each having come from the nearby cemetery. He had been visiting his mother’s grave; she, her son’s. In taking it upon himself to investigate the death of Sylvia’s son, Igor soon finds himself confronting racists. Sylvia is black; Igor is white. The deeper he delves, the more intricately embroiled he becomes and the more he becomes the focus of a police investigation himself.

Alongside the surface interplay of the characters, Igor remains preoccupied with an inquiry into the nature of existence. Within the field of human activity, notions of ‘good and bad’ and ‘pleasure and pain’ are perhaps bound to prevail, but the essence of existence must precede such differentiation. The presence of suffering in the world should not be taken as proof that the world cannot be perfect. A photograph consisting only of black or only of white would probably seem pretty boring. A world consisting only of good or only of bad would perhaps be comparable to such a photograph. Each extreme acquires its significance by being in juxtaposition with its opposite. Happiness does not result from the elimination of suffering; rather, happiness may ensue when the realm of pleasure and pain has been transcended.

One aspect of the title, Black & White, relates to issues of race. Another aspect relates to Igor’s ability in violent situations to interpret matters in black and white terms. However, it is as a general phrase covering all dualities that the title derives its primary import. The use of the ampersand character in the title imitates its usage by photographers when referring to ‘black & white’ images, and is intended to denote a synthesis of the individual terms into a unitary whole.

Erol Rashit was born in London. He studied ecology at the University of Liverpool, and obtained a PhD from the University of London for research into the effects of environmental fluctuations on species diversity. He is a Fellow of the Association of Chartered Certified Accountants, and for several years he held the post of Chief Accountant at Imperial College. Having made enough money to fund his future (modest) requirements, he has withdrawn from the ‘rat race’ in order to concentrate on his main interest: techniques for examining the illusion of ‘the ghost in the machine’ and for tracing consciousness back to its true source.

An interest in the nature of existence and the manner in which our minds reflect that nature.