You are here: Products Bizarre Stories by Greybeard 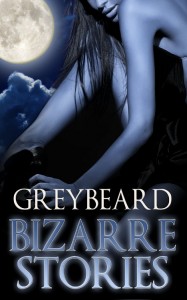 1. The guy that lets his woman know she’d best not mess around. She won’t like the consequences.

2. A futuristic bizarre space adventure in which dreams do come true.

3. A modern day witch, a black cat with unusual green eyes, and a sexy, slinky woman with similar eyes.

4. A good friend gives a girl a gift of her handsome stranger fantasy.

5. A near-future main battle tank, a time vortex, a mid-evil castle, a challenge, and sexy women all over the place.

6. You ever have one of those days? Beware whose sex life you mess with.

Greybeard is a pseudonym (I hadda’ spell check that) for a guy that writes YA / Adult fiction suitable for school libraries. I didn’t want that author name associated with erotica, my online handle has been Greybeard since the old BBS days, ergo, Greybeard (with an “e”, not an “a”).

I have novels in several genres (Western, SciFi, Sword & Sorcery Fantasy). On an author’s community someone asked, “What sells? What should I write?” The emphatic answer from several sources was “EROTICA”. I already had two of these stories laying around. I wrote four more and published it in hopes of making a few sales. eBook sales are so-so, I’ve sold one (1) Paperback out of my eight novels, this one.

Be the first to review “Bizarre Stories by Greybeard” Cancel reply