You are here: Products Bittersweet Humiliation by Nicholas P Boyland 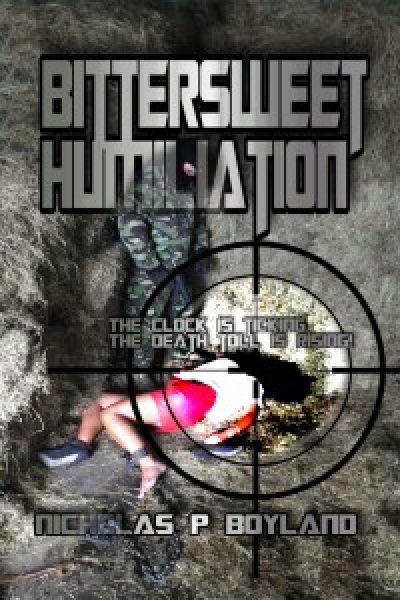 Recently reunited, newly-wed entrepreneurs; Neil and Natasha Curland, are enjoying an idyllic romantic and uninhibited honeymoon in a modest coastal town on the sun drenched island of Crete. Exciting new business opportunities loom in America; the land of opportunity. As a surprise for her new husband, Natasha has organised a blessing of their nuptials at the Texan ranch of her wealthy A-list actor friend and mentor, Warren Bateson. The trip will combine a Curland family reunion with a chance for her new husband to network his burgeoning TV show with the best of Hollywood’s movers and shakers. To add to their happiness, Natasha is quietly confident that she is expecting the couple’s third child.

On an island, on the other side of the Atlantic, a countdown has started. A storm is brewing deep within the troubled mind of a vicious psychopath. A nightmare from Natasha’s past with deadly terrorist connections whom the couple believe to be dead and buried. Unbeknown to the happy pair, their lives lie directly in the path of the storm.

The next few months will see the beautiful Natasha physically and mentally destroyed, reduced to a base human being; stripped of her freedom, her dignity, and everything she holds dear. Even escape may not release her from her torment.

The clock is ticking, the death toll is rising. From the onset, the authorities are tardy to react, slow to recognise the gravity of the threat. When their ineptitude threatens Natasha’s very survival; Neil seizes the initiative, and brings the power of Natasha’s wealthy influential friends to bear. Thanks to a fortuitous chance of his wife’s birth, Neil is able to circumvent the obstructive policies of the British authorities, and the investigation is transferred stateside; handed over to American jurisdiction.

Despite the availability of unlimited resources, progress is agonisingly slow, every second that Natasha remains in captivity; she moves a step closer to the point of no return. Finally, there is a breakthrough; a CIA operative in the Irish Republic discovers Natasha, now a drug addicted ghost, working in a stinking IRA brothel, and quickly implements a high risk plan to extract her. Within hours, she is on an aeroplane with a full medical detail, rushing her to a private medical centre in Austin Texas; back to the bosom of her loved ones.

Back in Ireland, Brian Dix; Natasha’s abductor and former lover, faces a harsh retribution for losing his charge. With the order to end his ex-girlfriends life, he receives a stark warning of what will happen if he fails again, and is put on a plane with the order to ‘finish the job’.

Brian Dix’s initial brazen attempt on Natasha’s life is thwarted, more by accident than design. Once again, he leaves a trail of death and destruction in his wake. Neil is forced to acknowledge that Brian Dix will keep coming with the force of a runaway freight train, to stop him, he must kill him!

Neil is an intelligent, resourceful man; an ex British soldier and lifetime biker, he has a number of tools in his arsenal which could prove worthy of his cunning adversary, but he knows his only chance is to seize the initiative and take the fight to Brian.

Notoriety through his English, ‘fly on the wall’ TV Documentary; ‘Copper Road Choppers’, allows Neil and his ‘rag tag’ military biker buddies to infiltrate the ‘Outlaw’ biker gang protecting Brian Dix. With the support of the charismatic but deadly ‘Brodie’, President of the ‘Waco Slaves MC’, a cunning plan is hatched to ‘smoke out’ Dix without compromising the integrity of the club or their President.

The plan goes astray when Brian proves far more cunning than they have given him credit for. He takes Brodie’s beautiful girlfriend Tarina hostage and discovers a way to break the big man down, and break him down he does, leaving him fighting for his life.

Brian Dix is not a man for meticulous plans, he possesses a psychotic, adrenaline fuelled cunning, once he starts, it’s a ‘flat out’, ‘peddle to the metal’ ride until something gives. Every gap in the fence you leave, he will slip through, every mistake you make, he will exploit. The climax of the story runs at an astonishing pace. When it seems that nothing can possibly stand in the way of Brian’s destructive power, Natasha must rise to the challenge, stand up and take care of business, to save herself, and to save her family.

Bittersweet Humiliation is not a biker story. It does not attempt to accurately depict the ‘Outlaw Biker’ lifestyle, or embellish it. This story is an romantic thriller where the principal characters just happen to ride motorcycles. It is their story.

The youngest of 3 children, I was always the ‘baby’. Dad worked nights a lot and I would curl up in bed with mum, and she would read to me the latest ‘Mills and Boone’s’ or ‘Barbara Cartland’ novel. Dad didn’t read a great deal, so the books around the house were mostly comics or mum’s ‘wishful thinking’ novels. As I started to read with a voracious appetite, my elder brothers book collection began to be devoured. With a combination of my mothers slushy romantic stories and my brothers sadistic thrillers, I started wondering what it would be like to create real romantic fiction, but with all the warts and horror left in. My writing is essentially Romance, but with a huge dollop of real life thrown in. No swashbuckling pirates here; real gritty characters who make mistakes and sometimes pay the ultimate price.