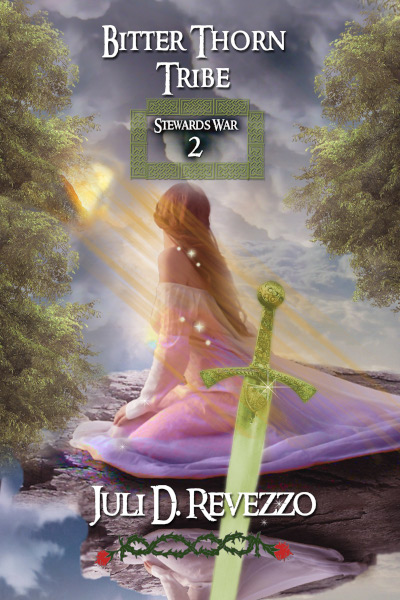 Destined to be a bride, if only the gods will let her…

Stacy Macken tries to acclimate herself to her training under Tuatha dé Danaan druids—as if she doesn’t have enough work in planning her wedding to her beloved guardian and fiancé Aaron.
When Fomorii loyalists violate their treaty and seek revenge for their recent defeat, even Stacy’s druids are at a loss to explain the mayhem that ensues. Can Aaron and his brothers-in-arms stop it before Stacy and her family are caught in the crossfire?

Juli D. Revezzo loves fantasy and Celtic mythology and writing stories with all kinds of fantastical elements. She is the author of the Antique Magic paranormal series and the Stewards Wars and Celtic Stewards Chronicles series, the historical romances, Camden Girls series, Vesta's Clockwork Companions, House of Dark Envy, Watchmaker's Heart, and Lady of the Tarot, and more. She is also a member of the Independent Author Network and the Magic Appreciation Tour. Readers can find me at:
Website: https://julidrevezzo.com/

The first book in the series was actually inspired by Megadeth song, Foreclosure of a Dream. Bitter Thorn Tribe arose from things that happened in the first book, little hints that something might not still be "right" in Stacy's world.

The whoosh of steel whispering through the quiet room played a soft tempo behind the silence as Aaron practiced.
The noise didn’t distract Stacy as she read the records of her ancestors piled before her. The files contained things she needed to know, things the harshad druids had hidden for centuries. Stacy didn’t like that secrecy; it seemed to her if the harshad warriors and druids hadn’t so closely-guarded their existence after her family immigrated to America, would she have doubted so much, as she had?
Beside the files lay a diary her great grandmother had given her, one by her ancestor Dechtire, she who founded Bitter Thorn Grove History Center, in the early nineteen hundreds. The history center which Stacy now oversaw, and that was, the harshad druids declared, the site of their sacred battleground. “I don’t want to see our descendants go through the same trouble and doubt I did. They need access to all these files and diaries.”
Aaron stood in the dining room, his fine muscles flexing as he practiced his sword work. “With the internet the way it is, trust me. There’ll be a leak sometime. Who knows what’s coming for the future of information retrieval. I’m sure our grandkids will have no trouble finding you.”
“Are you being prophetic?”
Another whoosh as he swung the sword back. The sword split into three blades. “Realistic. Our Technomages are savvy, but I don’t doubt someday, someone will find a way around their safeguards.”
Aaron passed her and gave her a quick kiss. In their bedroom, he put his harshad away then ducked into the bathroom, peeled off his shirt. He’d left the door open, so she got the full view, from her spot here.
He’d shaved yesterday, so what he sought in his reflection, she couldn’t tell. Stacy admired the smooth, angular cheeks and his green eyes, the cut of his jaw.
“I’ll make sure Cyreth double-checks those firewalls. God knows, if the children of today can breach government records, they’ll find us. I wonder if she wouldn’t mind dumping the computer system and going old school.”
Though, having seen how much data the harshad druids tabulated in their system, Stacy would hate to lose it all to some person’s memory. Even harshad druids had their limits, she thought. Or could they all do what Cyreth did? What about Dermot? Who was, now, the oldest druid she knew? She hoped, tonight, her dreams would help her find a way to convince them to give her what she wanted.
However, remembering one recent dream made her shudder. Ruth’s property in flames.
Whether her nightmare stemmed from these stories she read of her ancestor’s battles, or from stress, she didn’t know. Even now, the deadly flame licked over barn and grove in her vision. Someone—a woman’s voice she recognized vaguely—said, “Miss Macken, why’d you go?”
Go where?
“We’ll do our best to see no one but us can gain access to the records.” Aaron’s statement drew her back to reality. “Do you really doubt that?”
“Of course not.” Stacy supposed it didn’t matter, as long as her family had the most important parts of the tale. Which she absolutely meant them to. “Tell her it will give her something to do with the next five hundred years. That should cheer her up.”
He chuckled and shut the bathroom door. The shower faucet squeaked on.
I know what would make her happier, but I can’t vaporize Balor. No, Stacy knew they had no chance to defeat Balor permanently. By agreement, they had to settle for awaiting the next battle. Five hundred years from now.
And fight again, every five hundred years.
“Rules, rules.” She rose, returned the notes and papers to her bedside table, then flicked off the light illuminating the living room. Who’s monitoring that bloody agreement, and can I shred it when they’re not paying attention?
A light shone from the kitchen.
“Aaron, when did you go back into the kitchen?”
He shouted from the bathroom. “What was that about the kitchen?”
The shower’s heat attacked her skin as she ducked into the bathroom to repeat her question to which he answered, “I haven’t been in there in a while. Why?”
“The light’s still on. The sensor must be stuck again.” I should have that thing removed.
The electricians hadn’t built a light switch within easy reach of the door, so the condominium’s owner installed these movement-seeking sensors to turn them on and timers that shut them off after a few minutes of detecting no movement at all. Clever device, when it worked.
But sometimes, it didn’t. Like now. Stacy crept to the kitchen door, hoping the sensor wouldn’t see her; if indeed the lights were about to go out, she didn’t want to encourage them to waste more electricity. A quick flick of the switch would reset it.
She stepped over the threshold and froze seeing something that shouldn’t be in her kitchen: A Harbinger, a fiend of Balor’s devising and the bane of her existence. A beast somewhat like an alligator, a little like a dragon, that could become somewhat human when it wanted to sneak up on her. Clearly tonight, it preferred truth.
The Harbinger reeked of patchouli and musk as it crouched in her kitchen, peering at her with those evil quicksilver eyes, one claw on the light switch. The Harbinger smiled, saliva dripping from its fangs. “Heh … heh… Hello, Steward.”
Stacy scrambled back from the door and screamed.