You are here: Products Bite the Big One! by Sharon Karaa 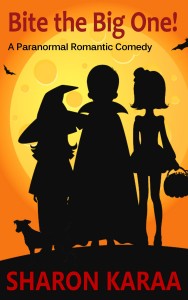 Bite the Big One! by Sharon Karaa

Jennifer Owens was stunned. The man of her dreams just appears in her life complete with sexy butt, blue eyes and a star on his forehead. Now comes the kicker. He says he’s a vampire slayer. She thinks he’s the product of one of her best friend’s dodgy spells. After all, who believes in vampires?

Sharon Karaa was first published at the tender age of fifteen. Flush with success, she waited another umpteen years before making the decision to become an independent author and publish her first book, The Last Challenge, in 2014. Since then, she has published a further two books and is polishing her next offering ready for publication in the next month. Sharon writes comedy because she needs something in her life she can laugh at other than herself.

The night sky was lit up to a purple haze by a full yellow moon. A bitter chill in the air caused me to pull my collar up around my neck as I looked up at the stars and marvelled at how tiny we must really be in the universe. My musings were interrupted as a sole figure made its way from tree to tree in an attempt to hide itself from view. I smiled to myself as I watched it advance. Wearing a long winter coat and a Trilby, it took leaping strides as it moved, finally darting to the tree closest to me, then coming out in the open and sauntering along the path as though it were the most natural thing in the world. Nothing out of the ordinary here, oh no, just taking a stroll in the dead of night through a locked park.
“You took your time,” I said, not looking at Josh as he took a seat as far away from me as the bench would allow. It wasn’t far.
He unfolded his newspaper and hid behind it. “It’s been busy, what can I say?”
Josh worked the night shift at the local morgue. I wondered what had caused the increase in business. “Anything I need to worry about?”
The newspaper rustled. “They’re putting it down to wild animal attacks but it’s definitely vampire-related. Someone’s been busy, that’s for sure.”
“Why?”
“Maybe someone’s building themselves a little army.”
I threw a piece of dried bread at the sleeping ducks, hitting one on the head with a crust and it flapped its wings in fright.
“You know, I’ve said it before, but you watch way too many spy movies. No one feeds ducks at night and you can’t read in this light. No one is going to be fooled, you idiot.”

Be the first to review “Bite the Big One! by Sharon Karaa” Cancel reply