You are here: Products Bite My Fire by Mary Hughes 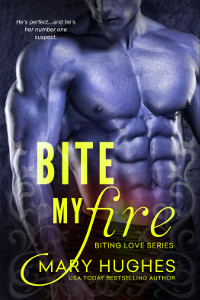 Bite My Fire by Mary Hughes

Elena O’Rourke packs a gun and an attitude. The gun, because she’s a cop. The attitude? Let’s just say her love life has been sorely lacking. But she’ll be damned if apartment manager Bo Strongwell is going to be the guy to turn that around, despite his Viking warrior vibe, cannonball muscles, and black satin voice—because Bo’s the biggest suspect in her murder investigation.

Master vampire Bo Strongwell needs a cop snooping around like he needs a garlic body wash. Fighting rogue vampires keeps him busy enough without Elena suspecting him of murder—even if she smells and tastes like his deepest desires.

Mary Hughes (written Hug-he’s but possibly pronounced throat warbler mangrove) writes smart and sassy stories of action and love. She’s the author of the Pull of the Moon Series, the Biting Love Series, the Ancients Series, and the Lovless Brothers Series.

She’s a bona fide computer geek and performing flutist. (And piccolo, but we don't talk about that.) When this USA Today Bestselling Author isn’t busy finding the missing </> tag or blowing her lungs out, she’s reading or binging on The Flash, Lucifer, or Agents of SHIELD…and petting the cats that inevitably end up on her lap.

I called it my “cop sense”, a sort of Spidey-tingling that was combination warning and awareness. Nothing mystical about it. I didn’t believe in the paranormal (enjoyed reading it but didn’t believe) so I knew it was probably just a heightened perception from paying attention to my surroundings.

But it had saved my ass a couple times. Saved other asses too. And it was never wrong.

I was sweating outside the rectory at Good Shepherd’s. Ruffles was a block over, marching away. Except for Ruffles and me, nobody alive was in the area. I’d swear to it.

But my neck prickled. A presence—something—

My voice died in my throat. My XD pressed against the most amazing abs I’d ever seen. Washboard, eight-pack…whatever, licking those abs would be like tongue-surfing warm ocean waves.

A black tee stretched in all the right places over a torso ripped enough to star in 300. Bronzed cannon arms, dusted with blond hair, crossed over a battleship chest.

Very male. And very big. Viking big. With him, even my five-nine felt petite. I choked on a whimper as my eyes continued helplessly up.

Or that wrenches you in the cunt. Especially if it’s been a while since you got a good lay (five years, three months and three days, but who’s counting? Don’t blame me, I’ve tried. The great god of FUBAR seems to have it in for me, at least as far as consummation goes).

But big, bad and yummy here was a stranger. Worse, he was wandering near a murder scene. Alone. By the Big Book of Police Rules, that made him a suspect. I firmed my grip on my gun. “Where’d you come from?”

Viking Guy’s eyes chilled to ice blue. “None of your business.”

He spoke in a dark rumble and radiated intensity. Ultra-alpha. I tamped down frissons of arousa…annoyance. One-handed, I whipped out my badge. “This says otherwise.”

“A detective. Tell me what you’re doing here. Now.” I underlined the word with a tiny push of my gun.

“If you must know, I was patrolling. For my neighborhood watch. Please don’t shoot me—Detective.” He raised his hands and stepped back, though honestly, he didn’t seem all that worried.

But he was cooperating. Slowly I holstered my gun. “Word of advice, buster. Don’t sneak up on people like that. It might get you killed.”

He arched one blond brow, all arrogance. “Like the little man in the parking lot?”

“What?” My hand snapped back to my holster. “How’d you know about that?”

“The yellow tape does rather stand out.” The guy’s voice had smoothed down. When he wasn’t channeling Christian Bale his voice was dark silk, stroking my flesh like black satin sheets and lazy summer loving.

Except thinking of that golden body, that satin voice in bed…I inched my hand from holster to jeans, surreptitiously adjusting the crotch.

Part of me was annoyed, but part was struck dumb at what the curve did to his lips. Like a gently swelling sea, that half-smile could lap my shores anytime.

“Ah. That might be a little difficult. I patrol until dawn.”

That’s exactly how he said it. Not “until five” or “third shift”, but “until dawn”. I gave him my best cop glare. “Let’s start with your name. We’ll see about dawn.”

He shrugged—I goggled. He was a big guy with massive shoulders, and that delicious, sinuous motion showed me he was all muscle. Acres of luscious, corded muscle.

When he plucked the notebook from my hand, it was a good thing, because the pages were starting to rattle.

Some blond men look pale and effeminate. There was nothing girly about the large dark hands engulfing my notebook. Handing him the pencil, my fingers brushed palms hard as iron.

Great galloping Krispy Kremes. Touching him was as exciting as palming my gun. My thighs were fast slicking up, and it wasn’t sweat.

I clamped my eyes shut in frustration and mortification. Years of unconsummated sexual foreplay were finally taking their toll. Apparently I wanted to jump the bones of anything wearing boxers and a blush, murder suspect or not.

There was some scribbling, then the notebook and pencil were pressed into my hands. I took a deep breath, cooling my unwanted arousal. “Thanks for your cooperation. Now, if you’ll just come with me to the station…” I opened my eyes.