You are here: Products Billionaire Unmasked by JS Scott 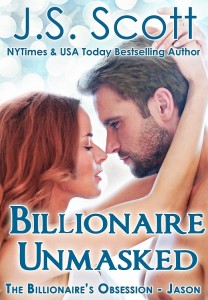 Jason Sutherland is a billionaire investor who has it all: good looks, billions of dollars, and every expensive toy a man could ever want. What he doesn’t have is the one thing he wants the most: Hope Sinclair. Unfortunately Hope, the little sister of his best friend, was off limits. But when he finds out that she’s getting married, he decides that he’s staking his claim before it’s too late, and it will take more than a little deception and risk to accomplish his goal. Hope could end up hating his guts, but after spending one forbidden night with her that he can’t forget, he knows he has to try to make her his forever.

Hope Sinclair was born into money, but being rich has never made her happy. The one thing she wants is a man to care about her and not her bank account. The closest thing she’s ever found to real happiness was the magical, passionate night she’d spent in the arms of Jason Sutherland…until that night turned into heartbreak. So when he unexpectedly comes back into her life in the strangest of ways, Hope is determined to resist her attraction to him.

J.S. Scott is a New York Times and USA Today bestselling author of steamy romance. She’s an avid reader of all types of books and literature. Writing what she loves to read, J.S. Scott writes both contemporary steamy romance stories and paranormal romance erotics. They almost always feature an Alpha Male and have a happily ever after because she just can’t seem to write them any other way!